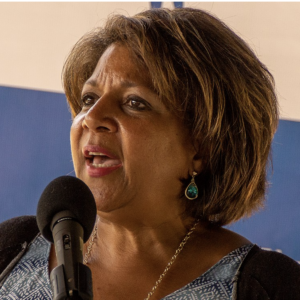 With a GOP majority in the state House and Senate, Democratic secretary of state candidate Melanie Levesque will almost certainly need bipartisan support to unseat incumbent David Scanlan on Wednesday. But at least one of her attempts to reach across the aisle may have done her candidacy more harm than good.

In a letter to Republican state Sen. James Gray touting her qualifications, Levesque offered a critique of Scanlan and the current operations of his office.

“A good example of the failure of vision in the Secretary of State’s Office is the ballot counting devices that we use for our elections,” Levesque wrote. “This is the last state election that our cities and towns will be able to use this device. In 2024 they will no longer work. Yet here we are just one month away from 2023 and the Secretary of State’s Office has not approved a new ballot counting device.”

But Gray, chairman of the Senate Committee on Election Law, responded with his own letter, accusing Levesque of getting the facts wrong. For example, he wrote, “The AccuVote Ballot Counting Devices are guaranteed to be available through the 2024 elections. After 2024 if a machine needs parts, they cannot guarantee that it can be repaired.”

Ballot Law Commission (BLC) chair Brad Cook confirmed the vendor has committed to maintaining the machines until 2025. “That’s something Melanie Levesque got wrong.”

“The Ballot Law Commission, not the secretary of state, approves the devices we use to conduct our elections,” Gray wrote. “We anticipate that several towns will request permission to test new ballot-counting devices in the coming months.”

For example, when voters in Ashland, Newington, and Woodstock cast their ballots last month, they were helping test ballot machines and software chosen by the BLC, not Sec. Scanlan. Once the commission approves the machines for use, the local municipalities, not the secretary of state, decide which devices to use.

Republican legislators tell NHJournal there doesn’t appear to be any GOP members prepared to vote for Levesque, particularly in the wake of her party’s attack on the state’s First in the Nation presidential primary. Her apparent lack of familiarity with the details of the job isn’t helping.

Some Republicans are also angry over the Democratic Party’s attempts to undermine trust in the election process to attack Scanlan.

In a Union Leader op-ed this weekend, Levesque accused Scanlan of mismanaging the recount in Manchester Ward 6, where a stack of ballots was apparently missed by a volunteer helping with the process.

“We witnessed that the current process cannot deliver error-free and undeniable results,” Levesque wrote. “The complete mismanagement of the first recount left the results of a race unclear and mired in conflict. A properly regulated and managed recount process would prevent or quickly catch errors like the ones this recount experienced.”

Republicans defend the work of Scanlan, his staff, and the volunteers. They also accused the Democrats, led by state Sen. Donna Soucy (D-Manchester) of undermining democracy when they went to court to block Scanlan from conducting a full recount. With a one-vote advantage for the Democratic candidate, Soucy and the party’s attorneys urged a judge to issue a permanent injunction to prevent the secretary of state from ever completely counting the votes.

Democrats lost in court, all of the ballots were counted, and the GOP held onto the seat by 26 votes. Scanlan oversaw more than two dozen recounts in November. None of his results were overturned by the BLC.

“AccuVote devices were audited after both the state primary and the general elections this year. The results are available online and legislation has been filed to continue the audits in coming years. They are very accurate,” Gray wrote.