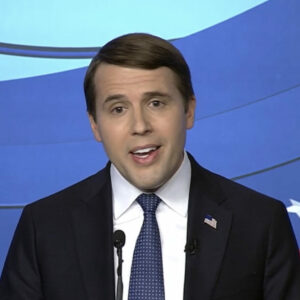 Leavitt, Pappas Battle to a Draw in Final TV Debate

Republicans tuning in WMUR Thursday night hoping to see Karoline Leavitt deliver a Bolduc-style debate defeat to her Democratic opponent were disappointed. Unlike Sen. Maggie Hassan the night before, Rep. Chris Pappas was on his game, handling Karoline Leavitt’s attacks and scoring points of his own.

And Democrats tuning in hoping to see Pappas turn around an election that appears to be slipping away were also disappointed. Despite turning 25 just two months ago, Leavitt was poised, sharp and effective.

Republicans and Democrats speaking to NHJournal on background rated the debate a tie. And unfortunately for Pappas, in 2022, the tie goes to the challenger.

The debate covered mostly familiar territory — including another round of WMUR’s off-putting “lightning round” questions. (“What is your favorite body of water in the district?” Really?). And both candidates appeared comfortable handling them.

“Leavitt did fine,” says UNH political science professor Dante Scala. “I thought she seems to be rushing a bit in the middle. Maybe it was the adrenaline talking.”

And, he added, “Pappas did well. But at the end of the day, he’s still stuck with Biden, and Leavitt’s not. And that’s what really matters.”

Scala is probably right. While there was plenty of policy debate Thursday night, it’s highly unlikely any single issue outweighs the case Karoline Leavitt made again and again: It’s time for a change.

“Send me to Washington and I will be the commonsense conservative voice that we desperately need,
Leavitt said. “We must change the direction of this country.”

Pappas did his best to create distance between himself and the Democratic team that’s governed Washington, D.C. the past two years. While he didn’t go as far as Hassan — bragging she was proud to have “stood with Donald Trump as he signed a bill” to fight fentanyl smuggling — Pappas didn’t hesitate to throw President Biden under the bus.

He repeatedly talked about “reaching across the aisle” and “breaking with his party,” making this yet another Granite State debate in which the Democratic candidates never offered any praise for the Democratic Party.

Leavitt didn’t want to let him get away with it. When Pappas came after her on the election integrity issue, she turned it around on him:

“The inconvenient truth, Congressman Pappas, is that Donald Trump is not on the ballot this November. You are, and Joe Biden is. Joe has been president over the last two years. And look what he’s done to the people of this state.

“This president is failing our country. And you voted with him 100 percent of the time,” Leavitt added.

Both candidates scored points, neither committed an ‘own goal.’ A tie.

There were missteps, of course. Leavitt had no answer to the question of how the U.S. could avoid a financial disaster if Congress refuses to raise the debt ceiling limit as she’s proposed, for example. And her continued embrace of election denialism was problematic, too.

Ironically, however, it was Pappas who was caught in direct misstatements of facts (aka “lies”) in the heat of the debate.

He claimed the Inflation Reduction Act doesn’t fund 87,000 new IRS agents. It does. In fact, it has to, because the only way the IRA reduces the deficit, as Pappas claims, is by squeezing an additional $124 billion out of U.S. taxpayers via “IRS Tax Enforcement Funding.”

Pappas also claimed Leavitt was wrong when she said he voted twice against funding a border wall during the Trump presidency. He did. Pappas backtracked and said they were just “procedural votes.”

“Do you think the people of this state care if it was a procedural vote or a regular one,” Leavitt fired back. “The fact of the matter is 100,000 people lost their lives to fentanyl overdoses last year. under your leadership. We need to change the direction of this country, and we need to elect folks who truly believe in border security and law and order. I do.”

But perhaps most stark was Pappas saying he doesn’t support a federal abortion law overriding state restrictions less than a minute after saying the right to legal abortion  “should be guaranteed in [federal] law.”

The law in question is the “Women’s Health Protection Act,” a federal law overriding state restrictions on abortion, which virtually every Democrat in Congress, including all four members of the New Hampshire delegation, have voted for.

But when Leavitt pointed out his support for the federal abortion mandate, Pappas replied, “that’s not true at all.”

These moments echoed Pappas’s 2020 WMUR debate performance when nominee Matt Mowers called him out, live on TV, for dating a corporate lobbyist for Amazon, a fact the congressman had not disclosed.

“How dare you? That is not true, Matt. This is an outrageous charge,” Pappas said responded.

The next day, in response to reporting from NHJournal, Pappas was forced to concede that it was in fact true.

The problem for Pappas is that these claims are easy to fact check. By blurting out something demonstrably untrue — as opposed to the usual weasel words smart politicians use to evade tough issues — he’s creating messes that can fill a news cycle, at a time when he doesn’t have many cycles left to catch up.

Once again, it’s unlikely any individual moment of the First Congressional District debate will matter.  In their closing remarks, both candidates succinctly summed up their pitch to the voters.

“Karoline Leavitt thinks politics is a performance. I think it’s about people and it’s about bringing people together around, solutions that can make a difference in the lives of Granite Staters,” Pappas said.

“Chris Pappas has presented himself as a bipartisan problem solver. The truth of the matter is, he’s a partisan problem creator,  voting alongside Joe Biden and Nancy Pelosi 100 percent of the time,” Leavitt said.

“Can you afford two more years of this leadership? The answer is no.”

The tie goes to the runner, especially the one who isn’t forced to run with Joe Biden.