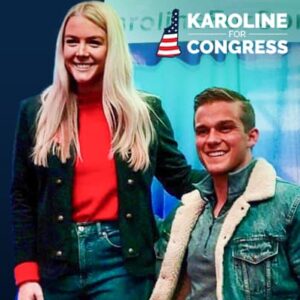 North Carolina Rep. Madison Cawthorn, a rock star of the fringe Right who’s campaigned in New Hampshire with GOP candidate Karoline Leavitt, is under fire for calling Ukrainian President Volodymyr Zelenskyy a “thug.” It’s a politically tone-deaf move at a time when Americans are rallying around the war-torn nation and many consider Zelenskyy a hero in the model of Winston Churchill.

For Leavitt, who declined to criticize Cawthorn’s comments, this incident may reveal the limits of a GOP primary campaign targeting the most extreme members of her party.

Democrats and Republicans both condemned Cawthorn’s comments. Sen. Lindsey Graham on Thursday described him as an outlier “in the largest sense possible on our side.” Democratic strategist Aaron Parnas tweeted, “President Zelensky is a hero. Madison Cawthorn is a zero.”

The story, which drew national attention, also drew fire towards Cawthorn ally Leavitt, who frequently touts her endorsement by the North Carolina Republican.

“President Volodymyr Zelenskyy is a hero, bravely leading Ukraine against an assault by Russia,” said DCCC spokesperson James Singer. “How can Leavitt stand by these disgusting comments from her endorser Rep. Cawthorn?”

Leavitt did not condemn Cawthorn’s comments or contradict his description of Zelenskyy as a “thug.”

Leavitt’s performance in the First Congressional District GOP primary has impressed many political pros and GOP insiders. The 24-year-old former White House staffer was an unknown when she launched her campaign. She’s since raised nearly $600,000 and gotten endorsements from Sen. Ted Cruz (R-Texas) and her former boss — and the third most powerful Republican in the House — Rep. Elise Stefanik (R-N.Y.).

At the same time, she’s staked out extreme political positions most often heard on Steve Bannon’s podcast (where she is a frequent guest).  She insists, despite all the evidence to the contrary, that the 2020 election was stolen from President Trump.

And she’s attacking Republicans like Mowers who decline to make the same accusation. “I am the only candidate who has the courage to say what the majority of Republican voters here in New Hampshire know – there is absolutely no way Joe Biden legitimately won more votes than Donald Trump,” Leavitt told NHJournal in November.

Leavitt is also attempting to thread the needle on Gov. Chris Sununu. She wants Trump’s endorsement —“I know the president is aware of the campaign that we’re running, and I hope to earn his support,” she told radio host Jack Heath — but she also knows Sununu is extremely popular among New Hampshire Republicans.

Asked by Heath about reports Trump wants someone to primary Sununu, Leavitt praised the Republican governor, but she added that, when it came to a primary challenge, voters should have choices.

That’s the same message as the “One Small State” organization, a “project of the 9th State Patriot Alliance.” One Small State says its mission is to replace Democrats like Sen. Maggie Hassan and Rep. Annie Kuster, and to “look at alternatives to Governor Chris Sununu and make the best choice in 2022!”

Their first speaker was Gen. Don Bolduc, the GOP candidate for U.S. Senate who famously described Sununu as a “Communist Chinese sympathizer.”

Six months ago, betting on a Trump-energized base to deliver in a GOP primary looked like a strong bet. Since then, Trump’s candidates have struggled in primaries across the southeast and midwest.

And if Cawthorn thought he was speaking for the GOP when he attacked Zelensky, he was wrong. According to a new Reuters/Ipsos poll, 73 percent of Republicans want the U.S. to give weapons to Ukraine, 81 percent support a boycott of Russian oil and gas, and 64 percent support the idea that America should take in Ukrainian refugees.”

Perhaps that explains why Cawthorn back-tracked on his anti-Ukraine comments via Twitter on Thursday.

Will Leavitt feel the need to re-position to the new post-Russia-invasion politics, too?