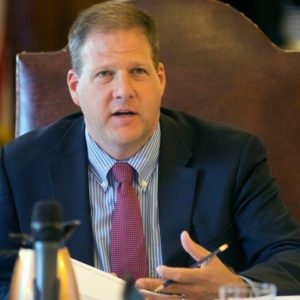 Fleeing A High-Tax State for New Hampshire? “Leave Your Politics Behind,” Sununu Says

During a Zoom meeting hosted by the Josiah Bartlett Center for Public Center, NH Gov. Chris Sununu celebrated the Granite State’s success attracting people and businesses from high-tax states, but he has a message for new arrivals:

Leave your politics at the border.

“The only thing I ask anybody when they come here is, leave your politics [behind]. I don’t care what conservative or liberal state you come from. Don’t forget why you fundamentally came here. Take a little time to look at our structure. Look at what ‘Live Free or Die’ is all about,” Sununu said.

Sununu was answering a question from Andrew Cline, president of the free-market think tank, about the state’s strategy to entice businesses to come to New Hampshire. In an article at the Bartlett Center website, he notes that New Hampshire has enjoyed the highest economic growth of any New England state, and grew significantly faster than the nation as a whole.

On Tuesday came word the state’s unemployment rate dropped from 4.2 percent to 3.8 percent in November, the first time it’s fallen below four percent since the beginning of the COVID-19 pandemic outbreak in March.

The pandemic has lit a fire under us,” Sununu said of the state’s recruiting efforts to bring new businesses to the state. “We have a very, very aggressive campaign going on across the country right now: California, Minneapolis, Boston and New York. We’re saying ‘You’ve heard the stories, now’s the time to come to New Hampshire.'”

Some Granite Staters, particularly Republicans, have complained that people fleeing high tax states like Massachusetts and New York are bringing their blue-state politics with them, undermining support for the “New Hampshire Advantage” policies that made the state an attractive destination. Census data show that in 2018, New Hampshire had 9,000 more people move in from Massachusetts than vice versa.

But rather than making the state more Bay State blue, those new arrivals have actually tended to vote Republican. Border towns like Pelham, Salem and Londonderry have become more Republican over the past two decades thanks in part to right-leaning migrants from Massachusetts.

And people are moving to New Hampshire, particularly compared to the rest of the region. It’s the only state in the Northeast on the top 10 “inbound” list, according to the latest Atlas Van Lines study. Both Connecticut and New York are on the top 10 “outbound” list.

In addition, a 2019 UNH study found that “measured against 2016, more than 20 percent of potential New Hampshire [2020] voters are new to the state’s electorate, making the voting population of the Granite State among the most mobile in the United States.”

While the “New Hampshire Advantage” is vital to the state’s economic health, Sununu says, it’s just part of a complex public policy puzzle. “Telling a business owner ‘Move to New Hampshire, you won’t pay any taxes on income’ is nice, but what about business taxes? What about energy costs? We have to work hard to keep New Hampshire a place people want to come to,” Sununu said.

Sununu has made reductions in the state’s business taxes one of his priorities in the upcoming legislative session, and the new GOP majority appears to be on board. Acting Speaker of the House Sherman Packard (R-Londonderry) told NHJournal he wants to advance recently-deceased Speaker Dick Hinch’s legislative agenda in 2021, an agenda that includes business tax cuts.