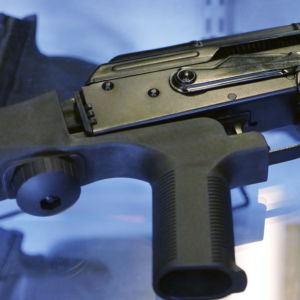 A little-known device called a "bump stock" is attached to a semi-automatic rifle at the Gun Vault store and shooting range Wednesday, Oct. 4, 2017, in South Jordan, Utah. Las Vegas shooter Stephen Paddock bought 33 guns within the last year, but that didn't raise any red flags. Neither did the mountains of ammunition he was stockpiling, or the bump stocks found in his hotel room that allow semi-automatic rifles to mimic fully automatic weapons. (AP Photo/Rick Bowmer)
News

The mass shooting which killed 58 and injured over 500 in Las Vegas on Sunday has placed public scrutiny on the use of ‘bump stocks,’ an accessory which allows semi-automatic rifles to fire at rapid rates.

Since bump stocks do not turn semi-automatic rifles into automatic rifles, they are legal to possess. Bump stocks were approved by the Bureau of Alcohol, Tobacco, Firearms and Explosives (ATF) in 2010 and are currently allowed in most states.

An unlikely critic of bump stocks emerged on Thursday: the National Rifle Association (NRA). The pro-gun group issued a press statement announcing its support for an ATF-led review into bump stocks but not a ban on the device.

“In the aftermath of the evil and senseless attack in Las Vegas, the American people are looking for answers as to how future tragedies can be prevented. Unfortunately, the first response from some politicians has been to call for more gun control. Banning guns from law-abiding Americans based on the criminal act of a madman will do nothing to prevent future attacks. This is a fact that has been proven time and again in countries across the world,” explained the NRA.

The statement continued: “In Las Vegas, reports indicate that certain devices were used to modify the firearms involved. Despite the fact that the Obama administration approved the sale of bump fire stocks on at least two occasions, the National Rifle Association is calling on the Bureau of Alcohol, Tobacco, Firearms and Explosives to immediately review whether these devices comply with federal law. The NRA believes that devices designed to allow semi-automatic rifles to function like fully-automatic rifles should be subject to additional regulations.”

Despite the NRA’s announcement, many gun shops and Second Amendment advocacy groups were hesitant or unwilling to respond for comment on this story. InsideSources attempted to contact approximately two dozen shops and advocacy groups.

Calls to ban the device have been echoed by Democratic lawmakers throughout New England and across the country in the wake of the nation’s deadliest mass shooting.

Sen. Dianne Feinstein, D-Calif., introduced the Automatic Gun Fire Prevention Act on Wednesday, which would make it illegal for any person to “import, sell, manufacture, transfer, or possess” a bump stock or any accessory designed to accelerate the rate of fire for semi-automatic rifles.

“While automatic weapons have been illegal for decades, some firearm accessories allow shooters to fire at similar rates to that of automatic guns, and we know that the shooter in Las Vegas possessed such accessories. There is no reason to have weapons that can fire at such high rates other than to inflict massive harm, and we should take the common-sense step of closing the loopholes that allow dangerous individuals to mimic the effect of deadly, fully automatic weapons.”

The proposed ban on bump stocks has attracted rare bipartisan support on the issue of gun control, with several congressional Republicans voicing their support for the measure.

Rep. Bill Flores, R-T.X., announced his support of banning bump stocks in an interview with The Hill on Wednesday. Flores formerly led the Republican Study Committee and is a gun-owner but said he could not support bump stocks after conducting research on the device.

A spokeswoman for Rep. Carlos Curbelo, R-Fla., said he plans to introduce legislation to ban bump stocks with Rep. Seth Moulton, D-Mass. The House bill is expected to receive significant support, namely from House Speaker Paul Ryan, R-Wisc., who said he would back a federal review of the devices earlier this week.

Sen. James Lankford, R-Okla., said the issue of bump stocks needs to be addressed by Congress in an interview with PBS Newshour. Lankford called for a review of the approval process for bump stocks and their purpose but did not yet support an explicit ban on the device.

White House Press Secretary Sarah Huckabee Sanders said on Thursday the Trump administration is “open” to discussing the idea of a bump stock ban if Congress supports the measure.