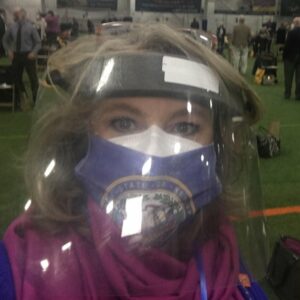 NH Rep. Debra Altschiller (D-Stratham) at the House session held at the Sportsplex in Bedford, NH due to COVID-19 restrictions.
[IS] Opinions

Posted to Politics February 25, 2021 by NHJOpinion

So, after all the hullabaloo in the NH House yesterday, I thought I would give it a telling so people understand better.

So the day was moving along mostly well, we had a couple of debates that got a little heated, and towards the end of the day, things started getting messy and edgy.

The House calendar had 2 parts, all scheduled for Wednesday, and any bills we did not finish on Wednesday would be taken up on Thursday. Part 1 were bills that needed to go-to second committee due to subject matter (usually bills with fiscal impact.. the policy committee approves the general policy, then refers the bill to finance to work out the budget issues), and part 2 were ‘regular’ bills with no second committee needed, they would move to the Senate if passed.

We had hard stops at 6pm Wednesday and 2 pm on Thursday, and this was announced by the Speaker at the beginning of the session Wednesday.

At 430pm, we had finished our Part 1 work and had another 1.5 hrs available to work on Part 2. A member got up and made a motion to special order a bill scheduled later in Part 2, to the next bill being presented.

This is not an unusual motion, and is made fairly frequently. Just that day, we voted to special order HB586 from Day 1 to Day 2. Last term, we special ordered HB1219 from day 2 to day one. So this again is not an uncommon motion.

Then en masse, Democrats begin heading to the exit. The Speaker ordered the doors locked to maintain a quorum. While this may sound extreme, it’s not uncommon action. In my 3 terms in the House, both under Republican and Democrat Speakers, Speakers have done this to maintain a quorum.

By the time the House Sergeant-at-Arms was able to block the exiting Democrats, many had already pushed past, ignoring the Speaker’s orders as they left. We then needed a quorum call. A quorum vote was taken, and the House maintained a business quorum of 218 members.. meaning over 120(ish) Democrats left the House in the middle of discussing a bill.

Procedural note: When the House quorum falls below two-thirds, but above 50 percent, all votes must pass by two-thirds of members present.

So now we’re back to the bill under discussion. The Democrats then began making motions.. motion to Table (failed), motion to Indefinitely postpone (failed). A motion of personal privilege (granted) and then a 10 minute(ish) meandering speech was given, at which point the Democrats started making ‘points of order’ and the Speaker finally ruled that further questions were ‘dilatory, meaning they are being used to delay the process only, not elicit facts to help deliberations on the bill.

I moved to call the question, a non-debatable motion, a vote was taken, my motion passed, we moved directly to the vote on the bill. The bill passed.

However, now we were at about 530p(ish) having spent an hour+ on all of the drama above on one bill, with only 30 minutes left, a limited quorum, and emotions high, The Republican Majority Leader made a motion to end the session and pick it back up today at 9am. The motion passed.

Timothy Lang is a third-term State Rep from Sanbornton