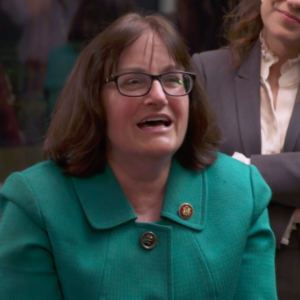 Kuster Confesses: Pelosi “Scares The Heck Out of Me!”

In a 60 Minutes segment Sunday night on how Speaker Nancy Pelosi wields power, New Hampshire Rep. Annie Kuster made a startling confession: Pelosi “scares the heck out of me.”

During an extended story on the Pelosi speakership, CBS’s Leslie Stahl asked a group of Democratic Congresswomen “How many of you are going to be willing to tell me how afraid you are of her?”  Rep. Kuster spoke right up:

“She’s the first person in my life who has scared the heck out of me. Honestly,” Kuster said, as her fellow members of Congress laughed uncomfortably.

You can see Rep. Kuster’s comments at the 7:00 minute mark.

“But I have so much respect for her, and it’s this combination of courage and grace,” Kuster said.

“But why were you afraid of her?” Stahl wanted to know.

“Trust me you don’t want to cross her,” Kuster confessed, before adding “There were times early on when we had to take difficult votes — I’m kind of embarrassed — we would run to the ladies room after the vote.”

Kuster’s story was confirmed later in the interview by Pelosi herself. “Yes, they do that,” Pelosi said. “The men do, too. It’s not just the women.”

Veteran Capitol Hill reporter Molly Hooper confirmed to InsideSources that stories like these are familiar to congressional observers.

“Speaker Pelosi is known for her ability to whip up votes, I’ve seen her working Democrats for support on the House floor and have run into several lawmakers who went against Pelosi as they escaped for breathing room or a cooling off period,” Hooper said.

“As Pelosi said, the power of the Speaker is ‘awesome,’ so lawmakers must calculate the cost of voting against a leader who has the power green light a bill important to the district or stop those measures from reaching the floor,” Hooper added.