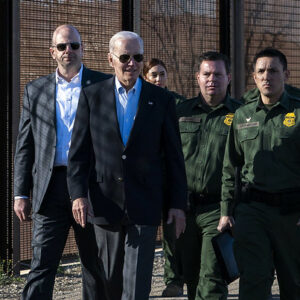 President Joe Biden recently staged a photo op at the border on his way to a summit in Mexico, having just unveiled a new plan to address the border disaster.

Maybe it will work as political damage control, but it is not going to fix the border — and will probably make it worse.

The plan has been presented as a carrot-and-stick – make it easier for people from several countries to get in “legally” while expelling those who sneak over.

Unfortunately, the stick is scrawny while the carrot is mighty enticing.

The first of the two sticks the president has said he will use against illegal immigration is the expanded use of “expedited removal,” which as the name suggests, is designed to quickly deport illegals caught at the border. Except that he already has this authority and, in fact, restricted agents’ use of it as recently as last year. And in any case, it can’t work unless you detain the illegals until they are deported, which this administration just refuses to do.

The other stick is getting Mexico to agree to take back across the border up to 30,000 border-jumpers a month from four countries — Cuba, Nicaragua, Venezuela, and Haiti — to get people to instead use a “legal” program Biden just made up (more on that below). That is fine as far as it goes, though President Donald Trump got a lot more cooperation from Mexico because he approached it from a position of strength rather than Biden’s almost comical weakness.

But what about illegal alien number 30,001? In November, 82,000 people from those four countries were “encountered” (the Biden euphemism for arrests) at the border. And what about illegal border-crossers from all the other countries in the world, who sent 150,000 illegals to the border in November? You know the answer — they will almost all be let in, especially after Title 42 ends (that is the COVID-related measure tied up in court that allows the Border Patrol to expel illegals without asylum hearings). And few if any of them will ever be made to leave.

There are two of these new made-up programs which are not authorized by law. One is for people from the four countries mentioned; for everyone else, there is the opportunity to be pre-legalized before even getting to the border using what looks suspiciously like a restaurant reservation app. The point in both cases is not to reduce the number of people coming across the border, but just to get them out of the politically damaging Border Patrol arrest (sorry, “encounter”) statistics by making their arrival “legal”.

The supposed legal basis for both of these programs is something called “parole”. In the immigration sense, parole is the narrow power Congress has given the president to admit individual foreigners without visas in emergencies. But Biden has been using it to let in people by the hundreds of thousands, and his new plan proposes to let in hundreds of thousands more. This is on top of the 1 million people who come in each year through the actual legal immigration system.

The bit of good news is that these carrots may shrivel before Biden uses them to entice even more people to the border. Florida recently sued to stop the blatantly unlawful abuse of parole, and it is entirely possible the judge will put these and other programs on hold until the trial is completed.

Even that happy development will not change the fact that we have an administration that does not believe in enforcing immigration law. And no judge can change that — only the voters can.

Mark Krikorian is executive director of the Center for Immigration Studies. He wrote this for InsideSources.com.