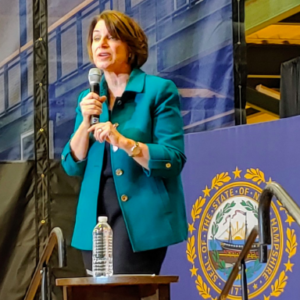 Granite State Democrats may experience some political whiplash this week as two prominent politicians who represent the two poles of their party’s ideology come to stump with local candidates.

On Tuesday, Sen. Amy Klobuchar (D-Minn.) campaigned with Sen. Jeanne Shaheen in Salem. Klobuchar was one of the more successful candidates in the 2020 Democratic presidential primary, coming in third despite little money and low name ID.

On Thursday, Massachusetts Rep. Ayanna Pressley, a member of the high-profile group of progressives in Congress known as “The Squad,” will be campaigning on the NH seacoast. The two are members of the same party, but the ideas they represent could hardly be further apart.

Klobuchar, who outperformed expectations in the First in the Nation primary, appealed to N.H. primary voters by taking moderate positions on major issues. She opposed Medicare For All, acknowledging that Sen. Bernie Sanders’ plan would “kick 149 million Americans off their current health insurance.”

Pressley is all in for socialized medicine and backed her fellow Massachusetts progressive, Sen. Elizabeth Warren, in part due to her embrace of Sanders’ plan. Warren, whose home state borders New Hampshire, underperformed expectations with just 9 percent of the vote — the worst performance by a top tier New England candidate in a New Hampshire presidential primary.

Klobuchar is a co-sponsor of the Green New Deal legislation in the Senate, but she has repeatedly said she doesn’t actually support the policy proposals it contains. “I see it as aspirational,” Klobuchar said.

Pressley, on the other hand, is so committed to the estimated $93-trillion plan she joined primary sponsor Sen. Ed Markey (D-Mass.)  on an eight-city nationwide tour promoting it. “The aspects of the Green New Deal that I am most focused on are equity and economic justice,” Pressley said at one forum. “This is not just an opportunity to fix the past to the first New Deal, but also to transform the economy.”

The Massachusetts congresswoman is also an unapologetic advocate of defunding the police. “This is simply about a refund. This is about true reparations. This is about investment in communities,” Pressley told TIME magazine. “Of course our first responders have a role to play in society, but they needn’t play a role in every part of society.”

“I’m not in favor of abolishing public safety departments and police departments,” Klobuchar told a Georgetown University forum on racial justice not long ago. Then again, she represents Minneapolis, a city ravaged by looting and violence where the progressive city council has dropped its “bold” plan to disband the police due to public pressure.

Not that Klobuchar is a centrist.

She’s open to packing the Supreme Court and supports banning so-called “assault weapons” and a federal buyback program for current gun owners. She’s open to eliminating both the filibuster rule and the Electoral College. This may put Klobuchar at the center of the Democratic Party, ideologically speaking, but they make her an extremist compared to the electorate at large.

And on Thursday, New Hampshire Democrats will be campaigning with a progressive “Squad” member who makes Klobuchar look like a Republican. It will be interesting to see if the media ask these local Granite State Democrats if they share Pressley’s ideology.