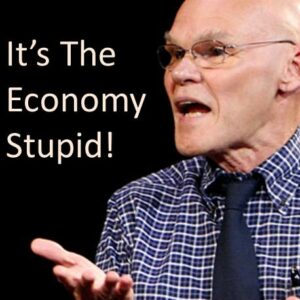 KIRK: Democrats Can Reclaim the Center By Listening to James Carville

“Give me one good reason to vote for you.” That’s the challenge to Republicans and the rallying cry for voters hoping to find an alternative Democrat to support in the 2022 elections. I spend a lot of time talking to undecided voters. This year, I am finding many who embrace the “none of the above” option.  Here’s why.

Neither party seems to be talking to centrists. Yet Republicans have established a message strategy that keys on themes most of us can repeat without prompting: Trump supports me, I’m more like Trump than my opponents, the 2020 election was rigged, immigration is bad, Roe v. Wade should be overturned, get rid of mask mandates, and the border wall should be completed. Run through advertisements of most any candidate running on the Republican ticket and you will find at least one of these issues. That’s message discipline. The absurd part is even incumbents whose offices have nothing to do with certain issues like the border wall try to find a hook claiming they have been “leading the fight” on that issue.

Try doing the same on the Democrats’ slate and the job is more daunting. The party has yet to articulate a clear, persuasive message. That’s rather alarming given that they actually have some pretty amazing news to share, making me wonder why someone like James Carville has yet to emerge to render emergency aid.

Carville famously claimed the rhetorical ground in 1992 with the now-famous phrase “It’s the economy, stupid.” Moreover, he was able to crystalize two other issues that formed the foundation for party support: Vote for change instead of “more of the same” and “don’t forget about health care.” So why is it so difficult to find resonant issues today?

The 2022 elections find a public demoralized after almost three years of pandemic isolation, confusing directives on how best to move the country forward, and a divisive 2020 presidential election. Even as unemployment is down, inflation is up. According to the Pew Research Center, 62 percent of Americans today are “fearful” and 55 percent are “angry” about the state of the country. Republican candidates seem to be using that public angst as justification for a solid opposition defeat. Democrats seem unable to respond to those emotions in effective ways.

There are messages that can work. For one, people are tired of the political divisions in their communities and even in their families. Finding a way back to each other, while not an effective fundraising strategy, is a resonant message. The end of ‘winner-take-all’ will mean that we can resume holiday dinners. Borrowing from Carville’s theme, why not a “return to normalcy versus more social and political strife” message?  That would expand the “build back better” message to “build back together.”

A second theme is emerging that has some serious local implications. While Republicans have advanced a states’ rights agenda arguing the federal government has failed us, they are also usurping the rights of cities, counties, and school districts in favor of statewide mandates. Talk to city leaders in Texas and they may well advise you that the state has left them with little control over local issues. Overturning Republicans is not the solution to that issue if the only thing Democrats do is assert their own brand of state mandates. Rather, asserting community rights over statewide moral policing may have some teeth that allow people of both persuasions to have control over their community lives.

Finally, as Carville asserted, it’s still the economy that matters – but with a twist. Democrats could well assert that it’s time to use your tax dollars where it will have the most effect. Immigration today is at one of its lowest rates in U.S. history, yet we still have multi-million dollar proposals to build what amount to the Great Wall of China or Hadrian’s Roman Wall, neither of which proved successful. Instead, it’s time for a message like “better value for the dollar” with a host of comparative messages. For example, how could Democrats use proposed funding to eliminate childhood hunger, build public infrastructures like bridges and updated water systems, or continue to improve health care infrastructure? Such cost-benefit messages could ring true regardless of party affiliation and chart a path forward for that all-important undecided swing voter.

Perhaps the most important message overall from the Pew study is “a majority of U.S. adults (61 percent) are optimistic that the new year will be better than the year that just ended.” We all need a dash of hope instead of our hopes dashed. Please, Democrats, deliver a message that gives voters an actual choice.

Rita Kirk is a Professor of Political Communication and the William F. May Endowed Director of Southern Methodist University’s Maguire Center for Ethics and Public Responsibility. She wrote this InsideSources.com.