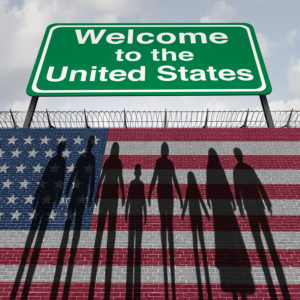 The American head and heart aren’t in alignment on immigration. They are savagely apart.

The head argues that all those people amassing on the U.S.-Mexico border, or living in camps across the English Channel, or trying to get into Turkey from Syria should be sent home. The heart argues that people anywhere denied a reasonable life in the place in which they were born are entitled to find what they seek: freedom from want. It argues, too, that immigrants have made us wealthy down through the centuries.

The head is adamant: Unfettered immigration is conquest one person at a time — one ragged child, one desperate mother, one hopeful man. Immigration is destabilizing much of the Middle East, particularly Jordan and Lebanon. It is threatening Europe and is changing the face of the United States.

Bad governance has an impact beyond the borders of the badly governed country.

Small stretches of the Mediterranean Sea which separate Malta, Greece, Italy, and Spain’s Canary Islands from Africa haven’t deterred migrant crossings. If these migrants are accepted by European countries, they will bring with them their religion, their language, and their loyalty to the culture which they left behind.

Before the jet age and the communications revolution, an immigrant sought to be a new American, a new Briton, or a new Frenchman. Many of today’s immigrants don’t feel compelled to assimilate and can reside in North America or Europe but retain the aims and culture of the country from which they came.

I know Koreans who have lived in the United States for decades and speak no English — and have no need to. All their wants are met in Korean, from banking to television to shopping. I also know U.S.-born Salvadorans who talk about El Salvador as “my country.” The wheels have come off assimilation.

The receiving countries deserve some blame for those who remain alien. The prevailing identity politics doesn’t meld a nation. The “woke” reverence for every culture except its native culture and language is destructive.

The immigrants who flooded the United States in the 19th century and the first half of the last century came to assimilate, refusing to teach their children their native tongues. Now immigrants think and feel as though they are the citizens of other countries. It is easy to do, and “multiculturalism” is the facilitator.

American hearts go out to those who are living in hell on the southern border: Frightened, in need of food, in need of places to sleep and to defecate, often sick, preyed on by criminals in their own number, and believing myths — especially the myth that when Donald Trump lost the presidential election, they would be welcome in the United States.

The heart says immigration is good for us and that we are all immigrants; that our generous inheritance, from the genius of the Founding Fathers to the syncopation of jazz and the blues to the techno-wonders of Elon Musk, is the product of immigration.

But my heart and my head, and those of many Americans, align in believing that we have to stop identity politics, treasure our American identity, and explain to the world that the United States isn’t open to all, otherwise all would come.

The Trump administration failed to end illegal immigration with its incompetence, its bluster, and its wall. So far, the Biden administration has done worse. It has allowed a myth to circulate around the world that if you get to Latin America, even to faraway Chile, you can get into the United States.

President Biden should demand that Vice President Kamala Harris, who he put in charge of the border, do her job and produce some ideas. Her declaration that she will work to strengthen the countries of Central America so that their people stay home is fantasy.

Even if Harris could do that, she should note that the new flood of migrants is coming from across the world — from Haiti to Pakistan and other parts of Asia. U.S. intelligence has failed, and the vice president fails daily to address this global problem, which will only get worse as the climate changes and the seas rise. The brain reels and the heart bleeds.