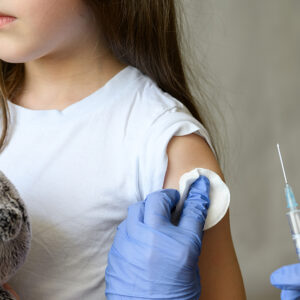 Kid Vaccine Rollout Off to Slow Start in NH

More than a week after the FDA and CDC approved Pfizer-BioNtech’s COVID-19 vaccine for children 5 to 11, New Hampshire pediatricians and hospitals are still ramping up the rollout rather than getting shots in kids’ arms.

So far, most parents who want to get their children vaccinated against the deadly virus must seek appointments through pharmacies like Walgreens and Rite Aid. The state is not yet ready to bring vaccine clinics to schools. And hospitals and health clinics are not all consistently ready to give out jabs. Money is the main issue behind the delay.

“It’s a confluence of factors, including a restriction on state-funded activities for children ages 5-11 due to the rejection of the CDC immunization grant,” said Jake Leon, a spokesman for the New Hampshire Health and Human Services Department.

Last month, the Republican-controlled Executive Council voted down $27 million in federal funding for vaccine distribution over concerns about the language in the federal contracts. The vote was highly criticized by Gov. Chris Sununu, who accused his fellow Republicans of listening to fantasies and misinformation about the vaccine.

Even though the Council recently approved $4 million in funding for children’s vaccines, Leon said the specific contract for that money needs to get approved before there can be school-based vaccine clinics. Until then, parents will need to look elsewhere.

“Alternative funding was approved last week by the Executive Council, so we are submitting contracts with regional public health networks and federally qualified health centers to support school-based vaccination efforts,” Leon said. “However, until those contracts are approved and operationalized, pharmacies will be the primary vaccination source for 5 to 11-year-olds.”

The state’s largest healthcare system, Dartmouth Hitchcock-Health, plans to start its vaccination program on Nov. 13, almost two weeks after the approval for the doses. SolutionHealth, the system operating Manchester’s Elliot Hospital and Southern New Hampshire Hospital in Nashua, is still waiting for the doses of the vaccine it ordered. Catholic Medical Center in Manchester is scheduling appointments now for December shots.

Sununu acknowledged during a press conference on Monday that there is an issue right now in getting the vaccine distributed, as clinics and health care centers are still going through the initial setup.“The supply of the vaccine is great, it’s about making sure we have availability,” Sununu said. “There’s kind of a crunch on the vaccine.”

Leon said the CDC authorized an initial round of 30,000 doses for New Hampshire kids in the 5 to 11 age range, all of which has been delivered, but Leon said that initial round isn’t enough to meet the expected demand for the vaccines.

“The federal government has asked parents to remain patient while this new formulation is produced and distributed,” Leon said.

The best bet right now for parents looking for a vaccine is to check www.vaccines.gov for the nearest pharmacy taking appointments. Leon cautions there could still be a wait for the pharmacy appointments.

“Parents should expect significant demand for pharmacy-based vaccinations until the contracts have been approved and their efforts are up and running,” he said.

Neither the state nor the CDC have posted any data yet on vaccine distribution for children in the 5 to 11 age range, so vaccination rates are not yet known. The data available since the start of the pandemic shows that children are least at risk from COVID-19.

Meanwhile, the news on kids and COVID remains positive.

Of the 141,000 people who’ve tested positive for COVID-19 in New Hampshire, just 7.5 percent have been children under the age of 10 — despite the fact that virtually none of them have been vaccinated. None of the 1,599 reported COVID deaths occurred among people under the age of twenty.