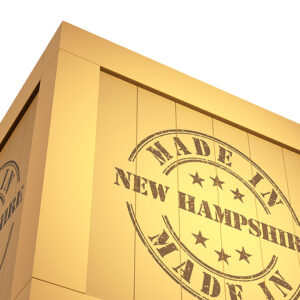 New Hampshire looks to finally be on the mend following the economic lows caused by the COVID-19 pandemic. The latest numbers show we’ve recovered about 77 percent of the jobs we lost during the height of the pandemic, and our small businesses recently received an added boost from the Small Business Administration.

That’s promising news, but there’s still an important factor that’s limiting both our current recovery and our economy’s long-term potential for growth. For more than three years, businesses throughout New Hampshire have been suffering from the effects of the Trump administration’s trade war with China, and the tremendous costs associated with it.

The tariffs the Trump administration put into place as part of the trade war were never a way of making China pay for its trade abuses. They are taxes on the imports American businesses need to operate.

From the outset, the tariffs have been a major obstacle for businesses who have to decide whether to try and absorb the cost, downsize, or pass the costs on to consumers. Every dollar spent paying for those tariffs is a missed opportunity for businesses to create new jobs, expand their footprint, and create new opportunities in their communities.

That is especially true for states like ours that rely so heavily on trade. According to the Office of the United States Trade Representative (USTR), trade has played an increasingly important role in our economic growth over the past decade, with Granite State exports growing 41 percent between 2008 and 2018. Trade supports thousands of jobs in our state. It especially helps small businesses, as USTR data also shows that 85 percent of the companies that exported from New Hampshire in 2016 were small and medium-sized businesses with less than 500 employees. As tariffs make trade more difficult and expensive, it gets harder for them to stay in business.

Unfortunately, the Biden administration has chosen to leave the tariffs in place. In order to live up to its economic goals and position businesses not just in New Hampshire, but across the U.S. to be as successful as they can be, President Biden and U.S. Trade Representative Katherine Tai need to right the wrongs of the past administration and finally put an end to its failed trade policies.

New Hampshire is fortunate to have two senators who understand how damaging the trade war has been in Senators Jeanne Shaheen and Maggie Hassan. Both have called out the shortcomings of former President Trump’s trade war in the past, with Senator Shaheen calling the trade war “ill-advised” and Senator Hassan correctly pointing out it could needlessly harm New Hampshire businesses without actually holding China accountable.

Now, I sincerely hope they will work with President Biden and Ambassador Tai to end the trade war once and for all. New Hampshire businesses have been needlessly paying the costs of these tariffs for far too long, and the Biden administration has an opportunity to provide a major boon for them precisely when they need it most.

The past year and a half have been difficult for businesses here in New Hampshire and across the U.S., but we are finally starting to recover from the worst of the pandemic. As long as the Biden administration leaves the tariffs imposed by the last president in place, though, recovery will be limited. Presidential candidate Biden acknowledged as much on the campaign trail. It’s time for President Biden to do the same.

Fred Keach is a Concord City Councilor At-Large. He wrote this for New Hampshire Journal.