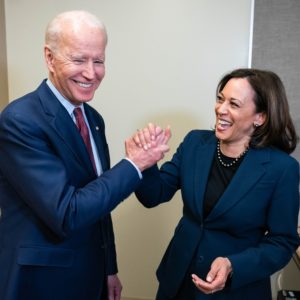 Kamala Harris Vs. The Invisible Man

Team Biden hasn’t been shy about their strategy for taking on Trump: Keep the spotlight on the president. Democrats believe that if the November election is an up-or-down referendum on the Trump presidency, Biden will be the next POTUS. And so, with the timely help of the COVID-19 shutdowns, Biden has waged an online version of William McKinley’s “front porch campaign.”

And as political analyst Henry Olsen noted, it’s working. “Democrats once urged their man to ‘Give ‘em hell, Harry!’ Today they’ll shout with equal vigor, ‘Stay at home, Joe!’ Expect him to gratefully take their advice,” Olsen wrote in the Washington Post.

Republicans may mock “Hidin’ Biden,” but they can’t deny his success. The former vice president has led in the polls for weeks, thanks in large part to his Invisible Man strategy keeping the attention on Trump.

So, why did he just pick the Human Torch as his sidekick?

“Kamala Harris is a very ambitious person who likes to be in the spotlight. She’s not known for keeping her head down and going unnoticed,” says GOP strategist Alex Conant, a veteran of the Rubio 2016 campaign and founding partner at Firehouse Strategies.

“I like to tell people ‘a good running mate only makes news on three days: The day they’re picked, the day they give their nominating speech, and the day they debate.’ If they’re making news on the fourth day, you probably have a problem.”

Most of the commentary regarding Kamala (and yes, she’s now a “single-name” celebrity, like “Oprah” or “Ellen”) has focused on the identity-politics aspect of her selection: the first woman of color to be on a major-party ticket. And that’s important.

But what’s been largely overlooked is Kamala’s actual performance as a candidate. Which, as President Trump loves to point out, wasn’t great. “I watched her. I watched her poll numbers go boom, boom, boom. Down to almost nothing,” Trump said.

He’s right. Harris came out of the gate as a top-tier contender, consistently polling near the front of the pack. But after a year of coast-to-coast campaigning, her support had fallen to five percent nationally. Among early-state voters, she was tied with Hawaii Rep. Tulsi Gabbard.

But plenty of unsuccessful presidential candidates make fine VP picks, as Joe Biden can attest. It’s the “burn out, not fade away” nature of her candidacy that’s at odds with the overall Biden 2020 approach.

Instead of simply failing to catch fire, Kamala kept creating controversies that raised questions about her candidacy: The attack on Biden’s support for “racist” politicians and policies,  Gabbard’s counter-attack on her record as a prosecutor, the embarrassing flip-flop on Medicare for All, etc.

As the New York Times reported after she dropped out of the race, her strategy was to rely on “big, television moments.” Rather than grinding it out on the ground, Harris’s campaign peaked when her confrontation with Biden over busing went viral.

After that, it was all downhill.

“Her inability to settle on a message that resonates may have hurt her campaign, but it won’t now because she’ll be delivering Biden’s message,” said Shrum, director of the USC Dornsife Center for the Political Future.

But the potential downside of the Kamala pick isn’t the messaging. It’s the messenger. She gives Team Trump a high-profile target for their political fire, raising questions about what a Harris presidency would look like should Biden be unable to finish a four-year term.

“People vote for the president, not the running mate,” Shrum said. “She’ll have an impact on African-American turnout in places like Wisconsin, Michigan and Pennsylvania.” But at what cost? How many headache-causing headlines will she generate along the way?

Conant says Kamala’s pick is in part a reaction to the Clinton 2016 campaign.

The Trump campaign is counting on plenty of political drama from Kamala Harris.