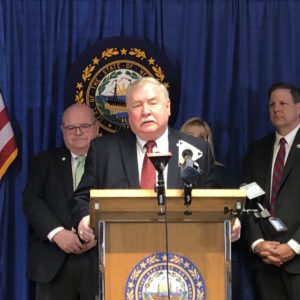 On paper, the legal fight between Gov. Chris Sununu and the four legislators who dragged him into court over federal COVID-19 relief looked like a pretty fair fight. Each had a specific page in the state code to point to, and the tradition in New Hampshire — not to mention America — is government by “co-equal branches.” The legislature warring with an executive is how our system works.

And when Democrats say, as they did in a statement after Judge Anderson’s ruling, “The legislature constitutionally holds the ‘power of the purse,’ that’s straight out of Schoolhouse Rock.

But Judge Anderson’s ruling, devastating and dismissive of the Democrats, revealed how weak, even sloppy, their case was. And just how much of a political “Hail Mary” it was from the beginning.

“The court finds plaintiffs’ status as members or leaders of the (Legislature) does not inherently impart them with standing. Rather, they must allege a concrete, personal injury. The court finds that the individual plaintiffs (lawmakers) lack standing to bring this suit, even if brought in their professional capacities as members of the legislature.”

In other words, the four Democrats — Representative Mary Jane Wallner, Senator Lou D’Allesandro, Senate President Donna Soucy and Speaker Stephen Shurtleff — didn’t even have the standing to bring the case in the first place.

But that’s just the beginning of the Democrats’ problems. As longtime attorney and New Hampshire constitutional expert Bryan Gould told NHJournal when the request for an injunction was first filed, “The fact is that the governor has — pursuant to his statutory authority in a state of emergency — already taken many steps that would otherwise be unconstitutional,” Gould said. “The legislature will have to explain to a judge’s satisfaction why the suspension of many constitutional and statutory rights and duties is consistent with the governor’s authority, but the expenditure of federal funds appropriated to redress the state of emergency is not.”

New Hampshire Democrats who had no interest in oversight as Gov. Sununu shut down thousands of private businesses and forced hundreds of thousands of law-abiding citizens into their homes suddenly discover a constitutional cause for concern when it’s time to hand out the cash? As NHGOP House leader Dick Hinch told NHJournal Wednesday, “This wasn’t principle. It was partisan politics at its worst.”

Not only that, but Gould notes that the case itself was poorly handled and executed by the Democrats.

“It didn’t help the plaintiffs’ cause that they tried to convert a separation of powers claim into a taxpayer standing claim on the fly. The signal they sent was that they hadn’t fully thought through whether the court had jurisdiction when they filed the action. That tends to undermine a court’s confidence in what the plaintiff is arguing.

“To get the kind of relief they wanted, they had to present a perfect case and anticipate every argument the governor would make in response,” Gould said. “They clearly fell short of that standard.”