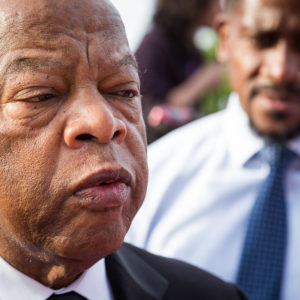 John Lewis Was a Lamb Who Roared

On August 28, 1963, John Lewis, chairman of the Student Nonviolent Coordinating Committee, or SNCC, had a fateful decision to make.

In a cramped, closet-like waiting room hidden by Abraham Lincoln’s massive statue, the elder lions of the civil rights movement demanded that he tone down his rhetoric — or risk not being allowed his turn to address the crowd gathered at the Lincoln Memorial for the March on Washington for Jobs and Justice.

An alarmed Bayard Rustin, the March’s lead organizer, had pulled Lewis, then 23 years old, into the meeting.

With the Rev. Eugene Carson Blake of the National Council of Churches, labor union leader A. Philip Randolph and the Rev. Martin Luther King Jr. at his side, Rustin demanded a line-by-line edit of Lewis’ brief, but aggressively demanding remarks. Lewis held his ground, angrily insisting that he should deliver his address as written.

“The time will come when we will not confine our marching to Washington,” Lewis had written and rehearsed for his spotlight moment. “We will march through the South, through the heart of Dixie, the way Sherman did. We shall pursue our own scorched-earth policy and burn Jim Crow to the ground — nonviolently.”

It was all too much for the older heads to embrace.

Lewis recalled in his autobiography that he held firm until Randolph, the elder statesman of the group, leaned in and tearfully implored him to back down.

“I have waited 22 years for this. I’ve waited all my life for this opportunity. Please don’t ruin it,” Randolph said. “John, we’ve come this far together. Let us stay together.”

Lewis blinked hard and swallowed his disappointment, agreeing to amend his remarks such that he was permitted to make history as the youngest speaker addressing the crowd that day.

By modern day standards and practices, that fateful moment might have played out very differently. If yesterday were today, Lewis, who died two weeks ago at age 80, might very well have been “canceled” for failing to resist and challenge the powerful and popular forces of the more temperate and older civil rights leadership.

It’s easy to imagine how Lewis’ modern-day counterpart might be compelled to wrestle with an equivalent dilemma: The backroom deliberation could be shared in real-time Twitter feeds, essentially creating a crowd-sourced debate over activists’ tactics.

As the marchers assembled at Lincoln’s feet, the young activist would be inundated immediately by more ardent activists to his left, demanding purity of purpose and demonizing any compromise.

Lewis avoided the Sophie’s Choice because a half-century ago Twitter didn’t exist and cancel culture wasn’t a thing.

Lewis didn’t drag his elder for clicks — or risk banishment from movement leadership for failing to do so. Rather, he used his short-term setback as fuel to boost his struggle to higher levels.

Indeed, history will remember Lewis’ lifelong moral authority as the fount of his power that grew more powerful over time. Perhaps that might never have been, if heated, in-the-moment fears of compromise had carried the day.

Because it’s so easy to shame people into silence on social media, I wonder if society is missing opportunities to engage thoughtfully as a way to hone public thinking and reach even better solutions or develop leaders and the ultimate currency of trust and moral authority.

It’s always a perilous proposition to compare events against different time and circumstance, which unfolds as it is wont to do. But human interactions exert incredible influence on the course of social events.

History is our shared understanding of those events, shaped by the power of the narrator. When one group prevails, the course of history is formed. Lions tell the history of the lambs. Not so much with Lewis. He was a lamb who roared.

Today, the roaring crowds, those who seemingly matter the most, have blue check marks on Twitter. On one level, these are the courageous inheritors of a tradition of accountability and of pushing the envelope of the possible, tweeting truth to power.

But the predominant role of social media has skewed the relative value of righteousness, sarcasm and indignation.

While young movement leaders continue to engage in precisely the kind of nuanced negotiations with elders and those in power offline, the online discourse provides little room for discourse or forgivingness, as transgressors — whether from the right, apathetic middle or most of all allies on the left — can be “canceled,” or metaphorically disappeared from any prominent public platform or career.

But, of course, cancel culture isn’t real, certainly not in the extremes it was in the 1950s and 1960s, when Lewis was inspired to public activism. Back then, cancel culture meant death, as it did for Medgar Evers and Addie Mae Collins, Denise McNair, Carol Robertson and  Cynthia Wesley, and Emmitt Till, and the Rev. George Lee.

A new generation has taken up the mantle of progress with tools previously unimaginable. But when this bleeds into “cancel culture,” it limits opportunities for human growth or redemption and for expanding allies in the struggle.

It writes off people, assuming them to be so corrupted as to deny their very existence. Over time, however, conditions change and people evolve, if allowed to do so.

John Lewis was never a shrinking violet. He was for the most of his life a radical outsider to establishment America, and he paid dearly for his political stance in opposition to racism and in support of black empowerment. He was aggressively confrontational when and where it mattered.

But he never lost sight of the long game. His many setbacks didn’t stop him from moving on and achieving victory whenever possible.

Such power is not, by definition, accommodation, which it is often and contemporaneously mistaken, when referenced by famous adherents such as former South Africa President Nelson Mandela and King. Rather, it is an acknowledgment that politics, like riders on a seesaw seeking balance, is an exercise in competitive power. Sometimes calling people out is necessary; sometimes it’s counterproductive.

Lewis understood how to maintain the balance between the two, turning the other cheek or accepting compromise, not out of weakness, but to preserve his strength to show up and battle every day.