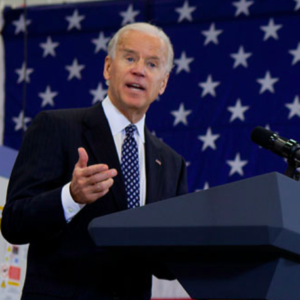 Joe Biden’s No Moderate on Immigration

When President Barack Obama told a joint session of Congress in 2009 that “the [healthcare] reforms I’m proposing would not apply to those who are here illegally,” South Carolina Republican Rep. Joe Wilson yelled out “You lie!”

Wilson later apologized and the next day on Good Morning America, Vice President Joe Biden said the administration accepted his apology. “But the fact is,” Biden added, “that the assertion the president made is absolutely true. It will not cover undocumented aliens.”

Fast forward ten years later, and Joe Biden is advocating the taxpayer-funded healthcare for illegals he once proudly opposed.

On Wednesday Joe Biden told reporters that he believed American taxpayers “have an obligation” to provide healthcare for people “regardless of whether they are documented or undocumented.”

In fact, Biden doesn’t even see them as illegal or immigrants, but rather fellow Americans. In 2014 he told the U.S. Hispanic Chamber of Commerce, “You know 11 million people that are living in the shadows. I believe they’re already Americans citizens,” Biden said.

If Biden is a centrist whose middle-way politics are designed to appeal to blue-collar voters, it’s not in evidence on the immigration issue.  While he’s fluctuated along with his party over his long career (when he voted for the Reagan amnesty bill in 1986, he’d already been in the U.S. Senate nearly 14 years), Biden’s pro-amnesty leanings were relatively consistent. Back in 2006, for example, the group United States Border Control gave Biden a grade of just 8 percent.

All this is happening against the backdrop of what even Democrats like Obama DHS Chief Jeh Johnson acknowledge is a crisis at America’s southern border. Just hours before Biden put American taxpayers on the hook for immigrants’ healthcare, Border Patrol Chief Carla Provost announced that the number of undocumented immigrants apprehended at the southern border topped 100,000 for the second month in a row. There were 109,144 apprehensions in April, up 158 percent from last year and the number of family apprehensions increased 400 percent over the past 12 months.

“The numbers are off the charts,” Provost told the Senate on Wednesday.

What solutions are offered by Joe Biden and his fellow Democrats? So far–none.

When Biden was asked about the surge at the border, he blamed President Trump for ending an Obama-era initiative that sent $750 million to Central American governments for local improvements. “If you make the schools better, if you make the streets safer, that’s the way to keep people from going. You’ve got to help grow the economy,” Biden said.

“The president just cut that all off. It was working.”

Interestingly, according to an op-ed in the Washington Post last Jue, that $750 million in funding hasn’t been “all cut off,” as Biden claims, just reduced to $615 million–still a significant amount.  The author of that op-ed?

Will blaming Trump be enough? Given the current state of Democratic Party politics, it may have to be. A significant segment of progressive primary voters back policies approaching open borders. As liberal columnist Peter Beinart points out, “the immigration section of the 2016 [Democratic Party] platform didn’t use the word illegal, or any variation of it, at all.”

The challenge comes in the general election where 18 percent of independents and 41 percent of Republicans say immigration is the single most significant problem facing America. Only five percent of Democrats agree, but if the party’s goal is to wrest away working-class white voters in industrial states, how is support for high levels of low-skill immigration a win?

Biden supporters reject the “open borders” label, but as Mark Krikorian of the Center for Immigration Studies points out, with all the turmoil at the border, simply saying you support border security won’t be enough.

“Their problem is even if they say ‘we’re not for open borders and we believe in border security,’ at some point they’re going to have to say which specific policies they support,” Krikorian tells InsideSources. “Is there anyone in the United States illegally–other than a criminal or terrorist–that Joe Biden would deport? He’s going to have to answer that question, not from Republicans or even moderates, but from [Jorge] Ramos at Univision and the ‘Nobody is Illegal’ crowd.

“Remember what Ramos did in the debate with Hillary Clinton and Bernie Sanders? He’s not going to let anyone skate,” Krikorian said. “And so it’s going to come down to how much influence will the radical Left have in the Democratic primary, as opposed to the slightly-less-radical Left?”