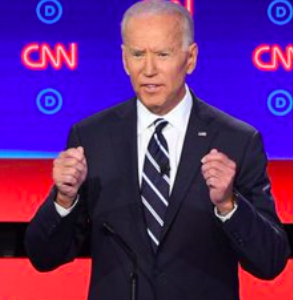 For fans of former Vice President Joe Biden gathered at Stark Brewing Company in Manchester for a debate viewing party, the problems began even before their candidate took the stage. Technical difficulties kept them from airing the debate on the projection screen, sending the two dozen or so Biden backers scrambling out into the bar for a TV.

When the 10 candidates finally appeared, Biden — already under a cloud over his treatment of women — was caught on camera asking Sen. Kamala Harris, “Go easy on me, kid.”

Biden’s night didn’t get much better.

Biden’s opening statement was well received, particularly when he went after President Trump. “Mr. President, this is America… We love it and we are not leaving it. And we’re certainly not leaving it to you,” a line that inspired spontaneous applause at the Fox Theatre in Detroit and at the bar in Manchester.

After that, however, Biden was besieged by constant attacks from all sides on virtually every issue. On healthcare, he was criticized by progressives for refusing to embrace “Medicare For All.” On immigration, Biden was attacked for Obama-era deportation policies and for not supporting decriminalization of illegal immigration. And Sen. Cory Booker took him to task over the 1994 crime bill, which Booker claims led to unfair treatment of people of color.

Late in the debate, Biden was hit with a one-two punch from Sens. Kirsten Gillibrand and Harris over women’s issues. Referencing a 1981 editorial written by then-Sen. Biden, Gillibrand asked what he meant when he wrote that women working outside the home would “create the deterioration of family?”

“So under Vice President Biden’s analysis, am I serving in Congress resulting in the deterioration of the family, because I had access to quality affordable daycare? I just want to know what he meant when he said that,” Gillibrand insisted.

Harris then followed up with an attack over Biden’s recent reversal on the Hyde amendment, which prevents federal tax dollars from paying for abortions, after decades of support.

“We’re talking about things that occurred a long, long time ago,” Biden said. “Everybody’s talking about how terrible I am on these issues. Barack Obama knew who I was.”

Biden frequently used his relationship with President Obama to shield himself from attacks — so much so that Sen. Booker called him out on it. “You invoke President Obama more than anybody in this campaign,” Booker said. “You can’t do it when it’s convenient and then dodge it when it’s not.”

But for the crowd in Manchester, Biden was good enough. Several of the Biden supporters rated his performance as good throughout the night. “He’s talking about what can really get done, what’s possible,” one Manchester local who declined to give his name told NHJournal. “The others were proposing plans that are never going to happen.”

“I’m a Biden fan,” said Dan Bergeron, a member of the Manchester School Board, who attended the watch party. “When you look at the Kennedys and how they were revered by people of all colors and background, people just loved them.  I feel like Biden has some of that same characteristic.”

Heather Ledoux of Litchfield, N.H. was “all in for Hillary Clinton” in 2016 but believes if Joe Biden had gotten into that race “he would have given her a run for her money.”

So why is she backing Biden as opposed to the many other candidates, including women, in the 2020 field?

“He’s got the experience that comes with his age — some people see that as a drawback but I see it as a positive — and he also has enough of the progressive values to understand today’s electorate,” Ledoux told NHJournal.

The good news for Biden is that his top asset is the perception that he can beat Donald Trump, which Democratic primary voters constantly tell pollsters is their top priority. One key to staying the Trump-killer in the 2020 field is to avoid taking the extreme, progressive positions — like calling for the end of private health insurance or supporting decriminalization of illegal immigration — that are unpopular with the general electorate.

“He’s never going to be able to compete on ‘crazy’ with Sanders or Warren,” a political pro told NHJournal. “His best bet is to own ‘not crazy, can beat Trump.’”

The bad news is that, while most Americans might see these progressive positions as “crazy,” Democratic primary voters love them. By attacking “Medicare For All” and healthcare for illegal immigrants, etc., Biden risks alienating the same Democratic base he needs to become the nominee. It’s a delicate balancing act. How did he do Wednesday night?

“I think the more Biden was challenged on his positions, the more it created a contrast between him and the rest of the field,” says Zach Friend, former spokesman for Obama for America. “There is a value to contrast. There will be a lot of commentary on whether Biden’s positions are out of touch with the base, etc. But they also give him a lane to run.”

Joel Payne, a D.C.-based Democratic strategist who worked on the Hillary Clinton campaign, isn’t as sanguine about Biden’s standing after Wednesday night.

“First, Biden didn’t perform well. Plus it’s not a great time in the Democratic Party to be running the way he’s running on issues. So it’s a combination of unpopular positions and an unconvincing performance,” Payne told NHJournal.

GOP consultant Craig Stevens was even more blunt: “Vice President Biden struggled yet again and got worse as the night went on,” he said. “TV doesn’t lie — he’s old. Time to pass the torch.”

Democrats, however, appear ready to stick with Biden as long as they believe he’s up to the task of taking on Trump. They see the polls consistently showing the former VP ahead of Trump in key states like Ohio and Michigan, and many Democrats — even those on the Left — are prepared to stick with him for now.

New Hampshire state Rep. Kris Schultz, for example, tells NHJournal that as a progressive Democrat, she’s fine with Biden, and many of the other candidates as well. And as for calling Kamala Harris “kid?”

“I thought that was classic Joe Biden, and I loved that so much.”