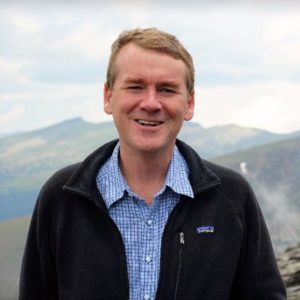 “Michael is running for President to build opportunity for every American and restore integrity to our government.”

And with those words, Colorado Sen Michael Bennet brings the total count of Democratic contenders for the 2020 nomination to 22: Democrats now have enough candidates to field an entire football team, both offense and defense.  (Ask yourself who you see as the QB, and you’ve probably picked the eventual nominee.)

Here’s the headline from the local press back in Denver:  “U.S. Sen. Michael Bennet of Colorado, cancer-free, is running for president.”

Bennet was diagnosed with prostate cancer last year, about the same time many of his rivals were gearing up their campaign machinery. Today he says he’s cancer-free and ready to run.

One person who’s likely to be particularly annoyed is his fellow Colorado Democrat, former Gov. John Hickenlooper, who’s also a candidate in the race. (No. Really. Check the list below. He’s on it.)

There are now five states that have multiple candidates in the Democratic POTUS primary: California, Colorado, New York, Texas and Massachusetts.

Many media outlets continue to report that Bennet is number 21 on the candidate list because they’re not counting former Alaska U.S. Senator Mike Gravel, but he’s likely to meet the requirements to make the debate stage and claims he’s in it to win it.

And the fun may not be over yet!  The Iowa caucuses are nine months away and more candidates may enter the race.  NYC Mayor Bill de Blasio is still a “maybe.”  Billionaires Tom Steyer and Michael Bloomberg have both dropped out, then said they may change their minds depending on how the campaign develops. John Kerry’s yet to give a definitive “no,” and Hillary Clinton’s still on the list because, well…Hillary Clinton.