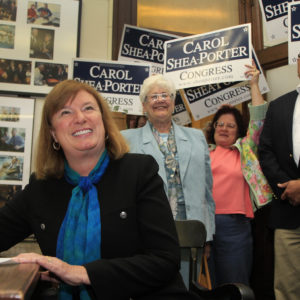 FILE- In this June 6, 2012 file photo, former Democratic Congresswoman, Carol Shea-Porter fills out her candidacy papers at the Secretary of State's office to be on the primary ballot to regain her seat Concord, N.H. In an Associated Press analysis of Congressional seats in the U.S. in the 2012 elections showed Republicans held on to a 33-seat majority. Despite the national trend of census-based redistricting in favor a political party, New Hampshire's Democratic party won both seats. (AP Photo/Jim Cole, File)
News

One week after Rep. Carol Shea-Porter, D-N.H., announced she will not run for reelection in 2018, the jockeying has already begun to replace her.

Granite State Republicans and Democrats alike are weighing their options for the open seat in New Hampshire’s First Congressional District. The district was viewed as a highly competitive toss-up even before Shea-Porter’s surprise announcement last week. The district supported Shea-Porter, former Sen. Kelly Ayotte, R-N.H., Gov. Chris Sununu, and President Donald Trump during last year’s elections. The seat has swung back and forth between the two parties in every election since 2010.

So far, three Republicans and 10 Democrats have indicated they are running or have an interest in joining the race. Below is a breakdown of the current pool of candidates based on whether they have announced a run for the seat, those who are examining a potential run and those who are passing on this election cycle.

Sen. Andy Sanborn, R-Bedford, announced his run for Congress on June 12. Sanborn received an endorsement from former Trump campaign manager Corey Lewandowski in August. After Shea-Porter’s announcement last week, Sanborn issued a press release commending the congresswoman on her career in public service while stating he was a candidate who wanted to “see serious change in Washington.”

The only other announced candidate is former liquor enforcement law enforcement chief Eddie Edwards of Dover. Edwards is running as a Republican and announced in late September that he would serve no more than three terms if elected. He signed a pledge by the nonpartisan group U.S. Term Limits, which Sanborn also signed.

One of the most prominent Democrats vying to succeed Shea-Porter is Executive Councilor Chris Pappas, D-Manchester, who passed on mounting a primary challenge against her last year. Pappas tweeted on Monday he is exploring a run for Congress and will make a final decision in the coming weeks.

Rep. Mark MacKenzie, D-Manchester, who served as president of the New Hampshire AFL-CIO for 25 years and was a member of Sen. Bernie Sanders’ presidential campaign steering committee, said he is giving a run serious consideration. MacKenzie established an exploratory committee this week to examine his odds at replacing the longtime Democrat in Congress.

The race to succeed has Shea-Porter has also sparked interest from two Iraq War veterans.

Maura Sullivan is a businesswoman from Portsmouth and a former Marine. Sullivan, who served as assistant secretary of Veterans Affairs in the Obama administration, is considering a run for Congress. Rochester City Attorney Terence O’Rourke said he is looking at potentially filing election papers in the future. O’Rourke is a Democrat from Alton who previously worked as an assistant U.S. Attorney in Alabama after serving in the Army Special Forces.

Three current Democratic politicians are considering a run for the open seat.

Rep. Mindi Messmer, D-Rye, said she will evaluate whether to run for Congress while Somersworth Mayor Dana Hilliard and Rep. Robert “Renny” Cushing, D-Hampton, both said they would give consideration to running for the Democratic nomination as well.

Several former political officials are looking at throwing their hats in the ring next year.

Matt Mayberry, former New Hampshire Republican Vice Chairman, has been speaking at political gatherings around the state and is said to be strongly considering a run. The Dover Republican’s interest in the seat is shared by Lincoln Soldati, former mayor of Somersworth, who said he is giving a run serious consideration. Former Sen. Burt Cohen, D-New Castle, who ran for the First Congressional District seat in 1986, said a run is unlikely for him.

Some names are the subject of speculation in political circles but have not indicated whether or not they will run for the open seat, including former Portsmouth City Councilor Stefany Shaheen, daughter of U.S. Sen. Jeanne Shaheen, D-N.H., and Sen. Donna Soucy of Manchester, who are both Democrats.

Several prominent Granite State political figures are opting against a run for the open seat, citing reasons ranging from prior commitments to a lack of interest.

On the Republican side, former Health and Human Services Commissioner John Stephen of Manchester declined to run for a third time. Stephen, who was the Republican gubernatorial nominee in 2010, said a commitment to his business and family were his primary reasons for passing on a run.

State Sen. Dan Innis, R-New Castle, also declined to run for Congress this time around and said he would focus on his reelection campaign next year.

Former House Speaker Terie Norelli, D-Portsmouth, Rep. Jackie Cilley, D-Barrington, who ran for governor in 2012, and Sen. David Watters, D-Dover, all decided to pass on a run. Democratic National Committee member Joanne Dowdell stated shortly after Shea-Porter’s announcement that she had no interest in running for the seat. Dowdell explored a potential challenge to Shea-Porter in 2012 but dropped out prior to the primary.

Both parties are expected to move towards new candidates after four consecutive elections between former Rep. Frank Guinta and Shea-Porter. Guinta did not respond to a request for comment on this story.

Rich Ashoosh, a Bedford businessman who lost a close primary to Guinta last year, was confirmed to the assistant secretary’s post in the U.S. Commerce Department in August. None of the other primary opponents from last year, Robert Risley, Jamieson Gradert or Michael Callis, are expected to run in 2018.

An earlier version of this story stated Rep. Mindi Messmer, D-Rye, would not run for reelection in order to evaluate a run for Congress. This is incorrect. Messmer is still running for reelection but is considering a run for Shea-Porter’s seat. This story has been updated to reflect that.