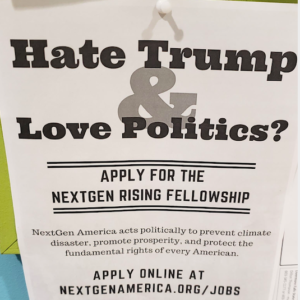 A NextGen flier passed out on NH college campuses.

Is Tom Steyer’s NextGen organization promoting voter fraud in the Granite State? That’s the allegation being made in at least one case of illegal voting that’s currently being prosecuted.

It’s no secret that NextGen America, now known as NextGen Rising, has been aggressive in its outreach to college students on behalf of Democratic candidates and liberal causes. In 2016, for example, Steyer bankrolled a NextGen staff of 50 to identify and turn out Democratic votes on New Hampshire college campuses. 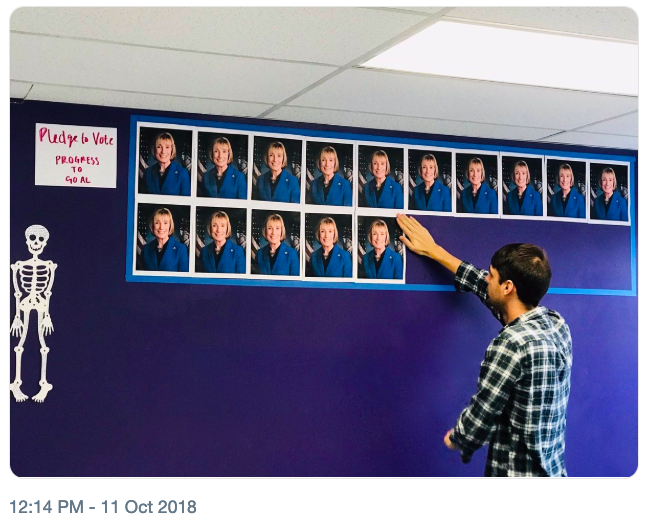 And NextGen has made no secret of their belief that the effort paid off. During an appearance in Bow, NH last July, Steyer bragged that the increased turnout among college students at UNH alone was larger than the 1,017-vote margin Maggie Hassan had over incumbent US Senator Kelly Ayotte in 2016.

In fact, New Hampshire NextGen activists measured their 2018 voter turnout goals in “Maggies,” a reference to their belief that they turned out enough college students–many of them out-of-state residents– to put the Democrat in the U.S. Senate.

Now comes an allegation that a NextGen representative may have encouraged a college student to illegally vote twice in the 2018 election. Kevin Landrigan at the Union-Leader has the story:

The lawyer for a University of New Hampshire student who pleaded guilty to voter fraud in the 2016 election said someone associated with either a town election official or activists with NextGen America had told the Massachusetts man he could cast a New Hampshire ballot.

Attorney Scott Bratton of Lowell, Mass., said Spencer McKinnon, now 21, to this day remains foggy about who gave him that advice, which prompted him to vote in Durham on Nov. 8, 2016, after he had already sent in an absentee ballot in Dracut, Mass., where he lived.

Last week Attorney General Gordon MacDonald’s office confirmed an investigation into whether an unnamed, outside group engaged in voter intimidation and coercion in the 2016 election in the state. State prosecutors refuse to say who that outside group is.

But Dan Passen, state chairman of the New Hampshire Federation of College Republicans has no doubt who he thinks it is. “It’s NextGen,” Passen told NHJournal.

College Republicans have repeatedly complained about NextGen’s aggressive on-campus partisanship. According to Hayden Harrington,  Chapter Chair for the University of New Hampshire CRs, several of his members claim NextGen staffers who were busing students to the polls in 2018 tried to discourage them from voting when they revealed they were Republicans.

Some New Hampshire colleges are taking action against the organization.

“At SNHU, the safety and security of our students is our top priority,” Southern New Hampshire University told NHJournal in a statement.  “After students and organizations on campus expressed concerns about Next Gen America during the 2016 election, the University made the decision to deny the group access to spaces for student interaction, including our green space, student center, or tables in the dining hall.”

And officials at both Keene State and Plymouth State fielded complaints of paid NextGen staffers repeatedly violating campus rules against solicitation in the dorms last year, passing out literature and promoting Democratic candidates.  According to reports, the incident has inspired Keene State to reconsider its relationship with NextGen in 2020. 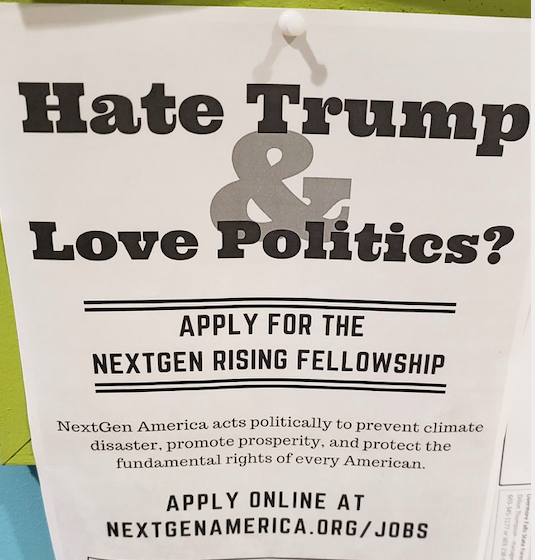 A NextGen flier passed out on NH college campuses.

“Our students deserve a fair and balanced understanding of our political candidates and should never feel intimidated, harassed, or coerced to support or vote for any particular candidate,” Passen said. “We call on the University of New Hampshire to reprimand NextGen by suspending the organization from their campus and university-affiliated activities for the duration of the case involving Spencer McKinnon.”

Tom Steyer’s willingness to pour $1 million into campus organizing in New Hampshire shows how important the effort is to him. Given that New Hampshire has the highest per capita population of college students in the country — about 11 percent of the population –and a significant percentage of those students are residents of other states — this is a serious political issue for a swing state that could play a vital role in both the 2020 Democratic primary and the general election.