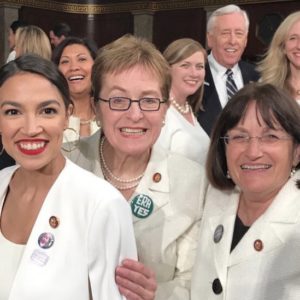 Is the Green New Deal a Good Deal for NH Democrats? They Don’t Think So.

Is the “Green New Deal” a good deal for Granite State Democrats? If so, they’re doing an excellent job hiding their enthusiasm.

And yet, not a single member of the all-Democrat New Hampshire congressional delegation is co-sponsoring the resolution presented by NY Rep. Alexandria Ocasio-Cortez and Sen. Ed Markey (D-MA). Do a Google search of “Green New Deal” and the names of New Hampshire’s leading Democrats and the results are paltry at best. 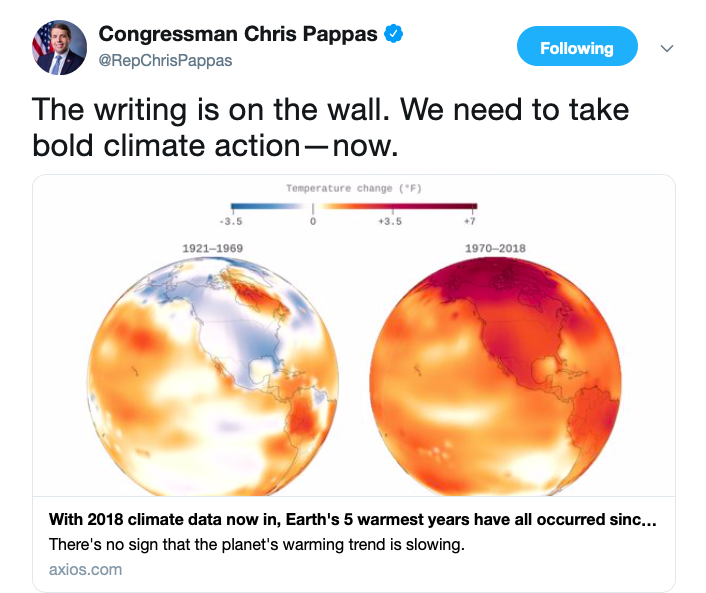 Citing a news story claiming that five of the warmest years on record have occurred since 2014, for example, Rep. Chris Pappas tweeted: “The writing is on the wall. We need to take bold climate action—now.”

But does “bold climate action” include the #GreenNewDeal? Rep. Pappas doesn’t say. And there’s no mention on his website or in his Twitter feed since the plan was rolled out.

A day after Rep. Alexandria Ocasio-Cortez released her ambitious plan to both end the use of carbon-based energy and expand the social safety net to include a socialized health care system and guaranteed basic income, there isn’t a single mention of her plan on the websites or in the twitter feed of Sens. Hassan or Shaheen, or Rep. Kuster, either.  It’s the highest-profile political proposal since the Affordable Care Act (aka “Obamacare”), and not a single member of the New Hampshire delegation has mentioned it.

Perhaps it’s because the AOC/Markey proposal would result in massive increases in the cost of home heating/cooling in a state paying some of the highest rates in the US already?  Or that their plan calls for ending air travel, banning the internal combustion engine and shutting down all nuclear power—which accounts for more than half of the electricity on the New Hampshire grid? The insistence by Rep. Alexandria-Cortez that the government could just print enough money to pay for the multi-trillion-dollar initiative?

Or is the “farting cows” problem? In a state where dairy products are the top agricultural product?

Some Democrats argue that New Hampshire’s politicians are simply more moderate than the national party. “New Hampshire remains a purple state and all four members of our delegation are pretty canny politicians,” says NH Democrat—and Beto O’Rourke booster—Jay Surdukowski.  “All four of them sustained election losses to a Republican along the way and they know New Hampshire’s voters are famously independent and unpredictable.”  Interestingly, O’Rourke supports the “concept” of the #GreenNewDeal, but has remained silent since Thursday’s rollout.

One Democratic insider tells NHJournal that the reason presidential candidates are boosting the #GreenNewDeal while Shaheen and Co. are trying to ignore it is because “they have two different missions. The presidential candidates are trying to win an election. The New Hampshire delegation have to govern and develop policy. They have to deal in reality.”

Perhaps, but another “reality” these elected officials have to face is that New Hampshire activists have already announced they intend to confront Sen. Shaheen and other Granite State Democrats if they refuse to endorse the AOC proposal.  A protest at Sen. Shaheen’s Nashua office is already planned for Monday morning, for example.

“Representative Alexandria Ocasio-Cortez and Senator Ed Markey are introducing a Joint Resolution for a Green New Deal. We know that if resolutions get enough cosponsors, they can become a major driver of the policy debate! If not, they can get lost in the political shuffle and fade into oblivion. That’s why between Feb 11-13, we are going to show up in person at our Senators’ and Representatives’ offices and ask them to cosponsor the Green New Deal Resolution,” reads a statement on the Action Network’s website, along with details for meeting at Sen. Shaheen’s office.

And a recent national poll by AP/University of Chicago found that only 57 percent of Americans would be willing to pay an additional $1 per month to fight climate change. A significant minority, 43 percent weren’t willing to pay anything at all.

Are New Hampshire voters—even the more liberal voters likely to participate in the 2020 primary—significantly different from their fellow Americans?

Based on their silence regarding the Green New Deal, the Granite State’s most prominent Democrats don’t think so.