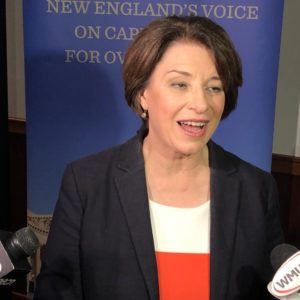 Sen. Amy Klobuchar addresses the press after a speech at the New Hampshire Institute of Politics in Manchester, NH on April 10, 2019. (NHJournal)
News

Is “Not Too Far” Far Enough for Klobuchar to Win Dem Primary?

After Sen. Amy Klobuchar’s speech at the New Hampshire Institute of Politics Monday morning, Kim Arndt of Concord, a self-described independent, told NHJournal that what she liked about the Minnesota senator’s speech was that, ideologically speaking, “she didn’t go too far.”

But is “not too far” far enough to win the Democratic Party’s presidential nomination in 2020?

Klobuchar is one of the Democrats in the 24-candidate field who’s running in what’s considered the “moderate” lane. During her speech to the audience of business leaders, political activists and students who gathered for the New England Council’s event, made an explicit appeal on the electability issue. “I have won every place, everywhere and every time I have run,” Klobuchar said. “And that includes 42 ‘Trump counties’ in my state last time [in 2016] and every congressional district including Michelle Bachmann’s.”

“I’ve done that, not by going after people, but by bringing people together.”

However, when NHJournal asked her directly about making appeals to moderate and crossover “non-blue” voters, Klobuchar gave a carefully-moderated answer.

“Well, I am a proven progressive,” she told NHJournal. “What does that mean? I figure if you are a progressive, you better make progress and you can’t just talk about it. You actually have to get things done.”

Then she added, “I have always been able to put together a coalition from the Left to the center when I was running for every job that I’ve ever had.” [emphasis added].

The phrase “from the Left to the center” is a far cry from Joe Biden’s explicit calls for bipartisan support, or even from Klobuchar’s own bipartisan record. It’s also more evidence that Democratic candidates see the limits of tolerance for cross-party appeals among the primary voters they need to win the nomination.

A day earlier Axios released a new Harris poll showing 40 percent of Americans– and a majority of Democrats– “would prefer living in a socialist country over a capitalist one.” Among women 18-54 years old, a key Dem primary demographic, it’s 55 percent.

Those numbers echo a NHJournal poll earlier this year that found 63 percent of Granite State Democrats would like to see America become more socialist and 90 percent would vote for a “Democrat who embraces Socialism” over Trump.

Klobuchar is hardly an old-school moderate. She told the New Hampshire audience she supports tax increases like ending the cap on Social Security payroll taxes and would like to see higher corporate tax rates.  She co-sponsored a proposed federal law preventing states from imposing virtually any limits on abortion, including late-term abortions. And while she was careful not to mention the “Green New Deal” in her speech, she’s a sponsor of the Rep. Alexandria Ocasio-Cortez/Sen. Ed Markey legislation.

At the same time, she has yet to embrace single-payer nationalized health care and now describes the Green New Deal as “aspirational,” telling  CNN’s Anderson Cooper she sees it as a “framework” and an “opening bid” on climate change policy.

In other words, the sort of “not too far” that independent voters like Arndt find appealing.

“She attacked the political environment, not the people,” Arndt told NHJournal. “We need to bring people together.”

But will that message bring enough Democratic primary voters together to put Klobuchar in the top tier of 2020 contenders?  With Joe Biden’s campaign showing some signs of weakness, Klobuchar is viewed as one of the candidates his supporters might turn to as an alternative. But she’s yet to catch fire on her own.

Klobuchar at just 1 percent in the Real Clear Politics national average, and in the most recent Iowa poll–a state that shares a border with Minnesota– Klobuchar is at just 2 percent. Is she disappointed in her performance in the Hawkeye State?

“I guess I look at the glass half full,” Klobuchar said Monday. “I’m number six in a field of 24 people. When you look at poll after poll, I’m doing better than a number of my rivals…who have either been running for president for a long time or from bigger state. So we feel good about our campaign.”