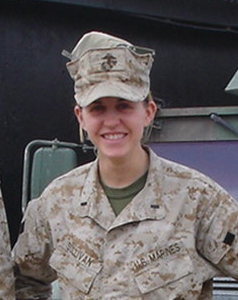 Is Maura Sullivan Blaming Her Military Service for Her “No-Show” Voting Record?

Is Maura Sullivan blaming the fact that she’s rarely showed up to vote on her service in the U.S. military? To some New Hampshire Democrats, it sounds like it.

Sunday morning, the Union-Leader’s Kevin Landrigan broke the story that Sullivan, who’s running in the 2018 midterm primary, hadn’t bothered to vote in the previous midterms or primaries herself since 2006. She didn’t show up to vote in the 2010 or 2014 midterms, or in the Hillary Clinton v Bernie Sanders presidential primary in 2016. And it’s not clear if she voted in the 2008 primary, either, which would mean she didn’t vote for Hillary Clinton in either of her primary bids for president.

“There is no other way to say this—I regret not voting more often throughout my adult life,” Sullivan said in a statement responding to the Union-Leader story. “It’s no excuse,” Sullivan says, before talking about her military service and relating it to her failure to vote.

“It’s no excuse, but I left home at 18, went to college and right after graduation into the Marine Corps. I served overseas and then moved around for jobs, including for a position as a senior Pentagon officer in the Obama administration. While my career has been deeply impacted by politics, I saw myself as a soldier and a public servant and was not nearly as politically conscious as I should have been,” Sullivan said, before contrasting her military background to that of her opponents:

“My opponents are trying to make this into a disqualifier. A few of them are either lifelong politicians, grew up in political families, or made politics into their careers. I respect their unique experiences, but mine is different… I had committed my life to education, military service and public policy.”

Is Sullivan saying that her military service made her less likely to vote? That’s how some Democrats read it. Others simply found her answer unsatisfactory.

Some Democrats took to social media to talk about the lengths members of the military have taken to cast ballots while serving abroad, while others claimed their service made voting an even higher priority, not a lower one. And the Chris Pappas campaign, perceived by many as the front-runner in the #NH01 Democratic race, claims that Pappas “has voted in every single election since he became eligible to vote.”

Sullivan has dominated the fundraising, and as a result has filled the airwaves with TV ads. On Sunday, she had fellow Democrat and veteran (and possible 2020 POTUS candidate) Rep. Seth Moulton of Massachusetts with her on the campaign trail. Will that money and political muscle be enough to win this election? Or will this controversy inspire Sullivan’s supporters to do the same thing she did in previous elections, and stay home?