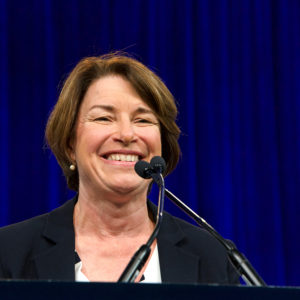 Is ‘Klo-Mentum’ Hitting New Hampshire at Just the Right — or Wrong — Time?

For weeks, one of the most common phrases heard from New Hampshire Democrats — and even some local Republicans — was: “Keep an eye on Amy Klobuchar. She could really break out here.” The same has been true of her debate performances — so much so that predictions of “This could be the debate that launches Klobuchar’s campaign” followed by flat poll numbers has became a meme of the 2020 season.

But in the aftermath of the Iowa Caucus confusion, a struggling Joe Biden and yet another deft debate performance by Klobuchar, the long-awaited “Klo-mentum” appears to have arrived. “In New Hampshire, there’s absolutely no doubt we’re seeing a surge,” she told The Associated Press on Sunday. “It feels good.”

If the Minnesota senator is right, is Klobuchar’s rise coming at exactly the right — or wrong– time for Democrats desperate to defeat Donald Trump in November?

If Klobuchar does well on Tuesday — perhaps finishing ahead of both Biden and Sen. Elizabeth Warren — one person who won’t be surprised is Neil Levesque, executive director of the New Hampshire Institute of Politics. Asked by InsideSources last week which of the 2020 contenders is the best match with Granite State Democrats, he didn’t hesitate: “Amy Klobuchar, definitely. The way she’s run her campaign, the general themes, the feel of her campaign, they remind me of Sen. Jeanne Shaheen.”

Shaheen, a three-term governor-turned-two-term senator, is the de facto leader of the state’s Democratic Party. Her center-left politics are popular with the voters and she is widely expected to easily win re-election in November.

Klobuchar’s politics are almost a mirror image of Shaheen. “I don’t always see things in the extremes. I see things in the grey areas… If you are sick of the extremes, you have a home with me,” Klobuchar said at a rally in Manchester on Sunday. It was a message that matched the crowd. One of her biggest applause lines was a shout out to Republican Sen. Mitt Romney for his vote on impeachment.

“I’m supporting [Klobuchar] because we are so diverse and we’re so hurting. The country is in pain, and she is the one I believe who’s going to bring it together. She can work across the aisle.”

“I think Amy has a message that can connect with the rest of the country,” said Candace Bouchard, another former Granite State legislator. “For me, this race is about who can win in November, and I think Amy can win. She’s not going to be bullied by President Trump, she’s going to be able to stand her ground. She knows her facts, she’s funny, she’s quick. She’ll be able to debate him and take him to task.”

These former pols believe Klobuchar is surging, and they think the timing is perfect. “No, it’s not too late for her,” Kelly said. “One thing about New Hampshire voters, we hate people telling us how we’re going to vote. We love defying the polls. However they are predicting we’re going to vote, we’re not going to vote that way.”

That’s what happened in 2008 when New Hampshire gave Hillary Clinton an unexpected victory over Barack Obama.  And few observers expected the 22-point margin of Sanders’ crushing victory over Clinton four years ago. A timely Klobuchar surge would have an impact on the entire Democratic field.

What some Democrats fear (and Republicans cheer) is a Sanders nomination, believing that a democratic socialist at the top of the ticket will hurt the party. “The Democratic Party is out in some goofy la la land waiting on Bernie Sanders’ revolution or the proletariat to rise up or some other [expletive],” legendary Democratic strategist Jim Carville said in Manchester on Saturday, He later added that voters “will run away from Bernie Sanders like the devil running away from holy water.”

If that’s true, then the past few days have been good news for Klobuchar but bad news for the Democratic Party overall. While Sanders’ support is solid and unified, three or four viable candidates closer to the center could split the anti-Sanders vote. Biden didn’t help by declaring during Friday’s debate that he expects to lose New Hampshire, sending a message to his voters that they may want to re-consider their options.

With his poll numbers falling, Biden has responded by releasing a tough new attack ad targeting, not Sanders, but Buttigieg. The ad appears to belittle Buttigieg’s service as a midwestern mayor of a small city (“Joe Biden saved the country from depression, Pete Buttigieg revitalized the sidewalks of downtown South Bend.”)

The more Biden and Buttigieg battle, the more some New Hampshire Democrats may see Klobuchar as an appealing alternative, splitting the anti-Bernie vote even more. The result could be Sanders winning the New Hampshire primary by a significant margin, while his leading challengers are bunched together far behind him in the polls.

“That’s certainly a plausible scenario,” says veteran Democratic strategist Bob Shrum, now director of the USC Dornsife Center for the Political Future. “However, it’s also possible that the talk of a Klobuchar surge is overblown. Look at the polls– she’s still in single digits, and the last few polls don’t show significant movement,” Shrum said. He believes it’s still more likely that Buttigieg and Sanders battle for a close New Hampshire victory, well ahead of the rest of the pack.

Veteran Republican strategist Mike Murphy agrees that reports of Klo-mentum may be exaggerated, tweeting: “My guess is the Amy NH surge is being way overhyped. But she might surge just enough to beat Biden and knock him into fifth, ultimately having more impact on him than creating any future for her campaign.”

Shrum says polling at this point in the race is difficult to analyze because there’s so much noise in the media and turmoil among the electorate making its final decision. “We’ve entered the ‘spacecraft re-entry point’ of the campaign in New Hampshire,” he says.

David Paleologos Director of Suffolk University Political Research Center says, “Right now Klobuchar has the momentum to potentially pass either Biden and/or Warren. If she passes them both, she becomes the Terminator by placing one of them fifth in New Hampshire.

“It’s a tall order for her, but the timing may be perfect.”