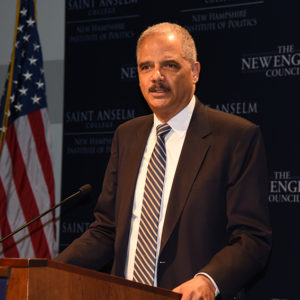 As NHJournal.com reported when the former US Attorney General appeared on Comedy Central and announced “Let’s do this thing!,” followed by an appearance at New Hampshire’s “Politics and Eggs” political breakfast in June, Holder has been one of few potential 2020 candidates willing to speak openly about his intentions.

More than a year ago, Holder was talking about “getting back on the field.”

“I have a certain status as the former attorney general. A certain familiarity as the first African-American attorney general,” Holder said in an interview. “There’s a justified perception that I’m close to President Obama. So I want to use whatever skills I have, whatever notoriety I have, to be effective in opposing things that are, at the end of the day, just bad for the country.”

Holder spends quite a bit of time talking about his connections to the former president, fueling speculation that he may be worried about a potential 2020 rival with a somewhat similar resume, former Massachusetts governor Deval Patrick.  Just a few weeks after Holder made the comments about being “close to President Obama,” an extremely pro-Patrick piece appeared at Politico entitled “Obama’s Inner Circle Is Urging Deval Patrick To Run.”

“Obama strategist David Axelrod has had several conversations with Patrick about running and eagerly rattles off the early primary map logic: small-town campaign experience from his 2006 gubernatorial run that will jibe perfectly with Iowa, neighbor-state advantage in New Hampshire and the immediate bloc of votes he’d have as an African-American heading into South Carolina.”

“Valerie Jarrett, Obama’s close adviser and friend, says that a President Patrick is what ‘my heart desires,'” according to Politico.

And then there’s Sen. Cory Booker, who’s been aggressively pushing cultural issues appealing to the anti-Trump base and has already caught the attention of at least one major New Hampshire player.

“My first choice is Corey Booker,” veteran Democratic strategist Jim Demers told NHJournal.  “Many people, like myself, believe this is the right time for the Democrats to nominate a new young leader who represents the future like Corey Booker.”

However, Deval Patrick and Eric Holder aren’t exactly in the Biden/Bernie demographic. The question is which of these three politically-talented African-American candidates would most closely capture the mood of the New Hampshire Democratic primary voters in 2020?

Holder has the built-in “impeachment appeal” by virtue of his experience and his message.  If Gov. Patrick truly has the backing of President Obama, that’s a plus. (Being from Massachusetts–not necessarily. Worked for John Kerry, not for Paul Tsongas.)

“I have campaigned with Cory Booker and his style and personality fits so well with what New Hampshire voters like,” Demers says. “He is very smart, extremely approachable and loves interacting with voters. We are spoiled here, we like to meet the candidates face to face and that kind of campaigning Booker excels in.”

Holder’s performance at St. Anselm College would hardly be mistaken for glad-handing, but he packed the house and his speech was well-received. He has the potential to be a powerful nominee for the Democrats in 2020.