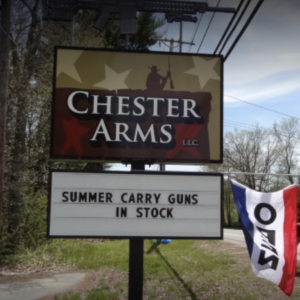 Two Manchester police officers injured in a 2016 shooting are headed to the New Hampshire Supreme Court after a Superior Court Judge ruled against them in their lawsuit against a gun store and the state.

The Supreme Court has agreed to hear the appeal from Manchester officers Ryan Hardy and Matthew O’Connor. They were shot by Ian Macpherson in May 2016. The officers are suing Chester Arms, where Macpherson bought the .40 caliber Smith and Wesson used in the shooting, and the New Hampshire Department of Safety, which provided the store the background check for the purchase.

Rockingham Superior Court Judge David Ruoff ruled in February that O’Conner and Hardy could not have prevailed if the case had gone to trial, because both the store and the Department of Safety followed current law. He dismissed the case on summary judgment.

The shooting happened when the officers tried to question Macpherson about a gas station armed robbery. Hardy was shot in the face and torso; O’Connor was treated for a gunshot wound to the leg, according to the Associated Press. Both officers have since returned to active duty.

The officers brought the lawsuit against the store and the New Hampshire Department of Safety, claiming the mentally ill MacPherson, who has a history of domestic violence, should never have been sold the gun in the first place.

MacPherson ended up pleading not guilty by reason of insanity in 2018 and was ordered to serve five years at the New Hampshire State Psychiatric Hospital.

MacPherson was initially unable to purchase the gun when he went to Chester Arms in March 2016. The store employee contacted the state’s Gun Line, run by the Department of Safety, for a background check on MacPherson. The Gun Line told the store that MacPherson’s status was “delayed” for further investigation, according to Ruoff’s order.

The Gun Line investigation found MacPherson has a history of domestic violence charges out of Merrimack, as well as court-ordered mental health evaluations. A relative told Merrimack police that MacPherson suffered from serious mental illness, and this was conveyed to the Gun Line.

While this information was given to the Department of Safety and the Gun Line, the state never told Chester Arms not to sell MacPherson the gun, according to court records.

The Gun Line investigation found MacPherson’s relationships to the victims in the domestic violence cases did meet the legal definition of a violation that would prevent him from owning a firearm. The Gun Line employees were also unable to verify his mental health condition, according to the order.

The store followed the law by waiting three business days to hear back from the Gun Line, according to Ruoff’s order. After not being contacted by the state, the store allowed MacPherson to buy the gun, according to Ruoff’s order. MacPherson’s Gun Line status continued to stay “delayed” for the weeks he owned the gun and did not change until after he shot the officers.

“The Gun Line continued the delay status on Mr. MacPherson’s transaction until the day he was indicted for the shooting, at which point the Gun Line changed the status to denied,” Ruoff wrote.