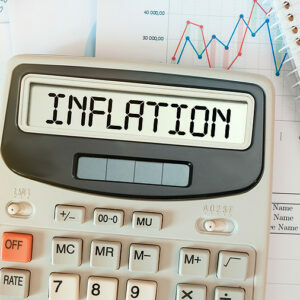 The biggest inflation spike in 30 years isn’t over, and New Hampshire consumers should expect prices to keep climbing.

The federal Labor Department reported Wednesday that the consumer price index, which is a collection of products ranging from gasoline and health care to groceries and rents, rose 6.2 percent from a year ago, the fastest surge in prices since December 1990.

“It’s not good, and it’s gonna be with us for a while, and it will probably get a little worse,” said John Dumais, CEO and president of the New Hampshire Grocers Association.

According to the Associated Press, the high inflation is eroding the strong gains in wages and salaries that have flowed to America’s workers in recent months. Americans are now spending 15 percent more on goods than before the pandemic, according to reports. Ports, trucking companies, and railroads can’t keep up, and the resulting bottlenecks are swelling prices.

Surging inflation has broadened beyond pandemic-disrupted industries into the many services that Americans spend money on, notably for restaurant meals, rental apartments and medical services, which jumped 0.5 percent in October.

Those numbers are very different from the message of the Biden administration, which has spent months insisting inflation is “transitory.” President Joe Biden also rejects analysis from economists saying the trillions in new federal spending Democrats have passed this year is creating demand that’s driving prices even higher.

Sen. Joe Manchin (D-W.V.) is worried. “By all accounts, the threat posed by record inflation to the American people is not “transitory” and is instead getting worse. From the grocery store to the gas pump, Americans know the inflation tax is real and D.C. can no longer ignore the economic pain Americans feel every day,” Manchin said.

“The inflation is as it’s been, one thing after another, as far as price increases,” Koloski said.

While customers can scale back as prices go up, businesses are not in the same position, he said.

“The general public not in the restaurant industry just says ‘Well, we are going to pause going out to dine,’” Koloski said.

Business owners do not have that option, Koloski said. They face increasing pressure to keep prices down in order to attract customers.

“We have held the line on increasing (prices) as every time we do menu updates that also has a cost associated,” Koloski said.

Dumais said New Hampshire customers should expect fewer options and increased prices as they begin shopping for Thanksgiving and Christmas dinners. That’s not a supply issue, but a supply-chain issue.

“The good news is we have plenty of food. We just can’t get it to the consumer,” Dumais said.

In the near term, that means seasonal items — fall pumpkin-spice flavored products, for example —  might not be as available as in past years. Most sellers will have plenty of the regular products and regular sizes, he said. Still, the U.S. is ahead of other countries in that there is plenty of food, despite transportation problems.

“It’s not as bad as we’ve seen in other countries,” he said.

Dumais said U.S. consumers should still expect to be able to buy the staples throughout the holiday season, though they might want to adjust their buying habits to help avoid panic buying.

“Something we can’t control is human nature,” Dumais said.

Like last year’s toilet paper shortage, which Dumais said was driven largely by panic-buying, people should be careful not to fall into another consumer-induced shortage. People should try to shop week-to-week, with maybe buying a small surplus.

“Go weekly for what you use in a week’s time, plus 10 percent stocking amount and build that inventory over time,” he said. “If everybody was to do that, there would be enough for everybody.”