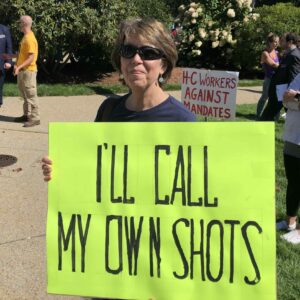 In Their Own Words: Anti-Vax-Mandate Protesters Speak Out at Statehouse Rally

A crowd of around 500 people gathered at the New Hampshire Statehouse Tuesday and commandeered the Republican Party’s press conference on President Joe Biden’s vaccine mandate. The people gathered for the event, on a weekday morning in September, were diverse by New Hampshire standards. Lots of families with young children standing next to retirees and hardened activists — all under the watchful gaze of the now-ubiquitous men in camo holding their AR-15s.

So, why did they show up? With so many issues in the news, from abortion to inflation to Afghanistan, why did vaccine mandates bring these Granite Staters to the Statehouse grounds?

Lawrence and Kate Knowles of Candia, N.H. were at Tuesday’s rally with their young children.

“Sure, it’s about my kids. But it’s about more than that,” Kate Knowles said. “America stands for freedom, and when we start taking freedom away, we’re not America anymore.”

Asked why the mandate issue, as opposed to the many other political debates, brought his family to Concord, Lawrence Knowles offered two reasons.

“One thing I think is this is just a culmination of so many things that have been happening, and I’m probably just getting fed up and I’m like, ‘Alright, that’s it. I got to come out here and do something.’ We’ve seen a lot of people kind of go quiet. And we said that’s enough. When one person goes quiet, one person has to get loud.”

Lawrence Knowles also said the scope of the government’s reach in this issue is so extreme, it’s sparked a reaction.

“I’ve never seen the government trying to get so involved in our personal lives. It’s like they are trying to invade every single aspect of freedom that this country has come to know with this mandate. The government’s trying to force us. They’re going to take away our right to provide for our family. We could get evicted because we can’t pay our mortgage, can’t feed our kids, can’t send them to school. What kind of government does that?”

The Knowles’ said they wanted Gov. Chris Sununu to get more involved and join efforts by other Republican governors to oppose the mandate.

Pamela Jewel from Loudon attended the rally with two other mothers from her town. They all agreed that, for moms, the mandate hit close to home.

“It’s for my children, Jewel said when ask why she was there. “My children deserve the same freedom we had, and they shouldn’t be — nobody should be — coerced into getting these shots for work, for play, for anything. It’s your body. It’s your choice.”

And, Jewel said, she has a personal experience that put her off the COVID-19 vaccine.

“My Dad got the shot in March when they were having it at the Speedway, right? He died two weeks ago of COVID. So what did that shot really do for him? Did it save him, or did it kill him?”

Ed and Debbie Kruzel of Pelham were blunt and to the point when asked why they showed up.  “Freedom to choose,” was Debbie’s answer. “Against the mandate, it’s stupid,” said Ed. “It’s being forced upon us without our say so. And that’s wrong — period.”

Their friend Melissa from Salem added a Biden-esque “This is ‘Live Free or Die’ New Hampshire. C’mon!”

Janet McManus of Sutton was also simple and direct in her thinking: “The shot can kill us,” she said. “I want the governor to stand up for our rights.”