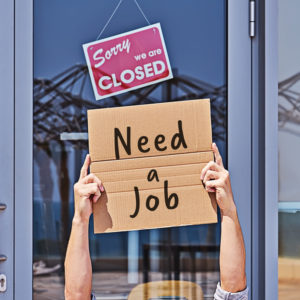 Last week, Gov. Chris Sununu vetoed HB 1166, an extension of unemployment benefits that had easily passed both houses of the Democrat-controlled legislature.

The benefit included what came to be known as the “Too Scared to Work” benefit. This proposal, championed by state Sen. Majority Leader Dan Feltes, let workers collect COVID-19-elevated unemployment benefits if they simply claimed they were too afraid of coronavirus to return to the job.

“If workers feel at-risk returning to work… or feel at-risk once they are back on the job, they should continue to receive unemployment insurance benefits under expanded COVID-19 eligibility, ongoing health insurance, as well as any other employer-provided benefits,” according to Feltes. This included cases when the employer met all health department requirements for on-the-job COVID protections.

“I had hoped that legislation aimed specifically at supporting our state’s workforce during a pandemic would have not fallen victim to the governor’s reported ‘err on the side of a veto’ approach to legislating,” said House Majority Leader Doug Ley (D-Jaffrey).

But is paying people not to work, particularly those who simply claim to feel uncomfortable about working, really “supporting our state’s workforce?” Or is it supporting the “I’d rather not work” force?

Meanwhile, they want teachers to receive full salaries while spending just a few hours a day on a laptop camera. The vast majority of public schools using remote learning last spring didn’t bother even to take attendance, and much of the grading was either abandoned or reduced to pass/fail.

In other words, a lot less work for teachers, but the same pay. Zoom learning is a waste of time for most students and an absolute fiasco for working families. But for members of the teachers union, it’s a lot less work than classroom teaching — all with the support of the state’s Democratic Party.

A generation or so ago, Democrats were the party of the working class. Their solution for most of America’s problems was a job — sometimes government-funded, make-work job, but a job nonetheless.

Today, a significant part of the Democratic Party’s coalition sees a job as optional, not essential. They have no problem with using tax dollars to keep millions of Americans off the job and under lockdown. After all, it’s just a test run for the “Universal Basic Income” many progressives like Rep. Alexandria Ocasio-Cortez (D-N.Y.) have already embraced.

And it’s not just AOC.

Remember during the Obama administration when Speaker Nancy Pelosi lamented what she called “job lock:” people who were forced to work in jobs they didn’t like out of necessity?

One of the benefits of Obamacare, Pelosi argued was that “We see it as an entrepreneurial bill, a bill that says to someone, ‘if you want to be creative and be a musician or whatever, you can leave your work, focus on your talent, your skill, your passion, your aspirations because you will have health care.’”

Today in Washington, D.C., Republicans are arguing that it’s time to end the $600-a-week “corona-bonus” unemployed workers have been receiving from the federal government during the pandemic. Because a significant percentage of those getting it are actually collecting more money not to work than they will on the job. To which progressives reply, “You say that like it’s a bad thing.”

In his book “Men Without Work,” Nick Eberstadt reported that between 1965 and 2015, the percentage of working-age men outside the workforce increased more than double, from 10 percent to 22 percent. Unemployment benefits and government checks replacing work — and the dignity that comes with it — is part of the reason.

Why launch a jobs portal when a COVID-crushed economy has driven unemployment in the state to around 12 percent?

Because according to NHES, there are more than 1,000 unfilled job openings in the state, primarily in long-term care facilities and manufacturing, where employers are still struggling to find willing workers. The state’s experience echoes anecdotal reports from Granite State business owners, who say their former employees aren’t willing to return to work or they can’t find workers to fill vacancies as they attempt to reopen.

Why aren’t Democrats championing jobs and the fundamental value of work? Instead, they’re simultaneously pushing for a $15 an hour minimum wage (which even ardent supporters acknowledge will kill some jobs) and unregulated immigration, which puts even more downward pressure on employment for low-skilled working Americans.

Then again, if you believe in “free money” from the government and $600 a week unemployment bonuses, it doesn’t matter if there are any jobs or not.

It’s a message that has an appeal among progressive activists like AOC. But will it work with working-class voters in the Granite State?