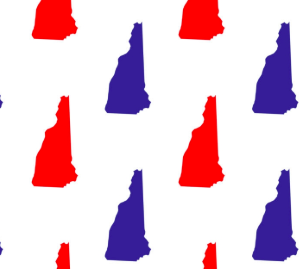 In yet another example that, two months after the 2018 midterms the 2020 POTUS race is well underway, Amy Walter and Cook Political Report have released their “2020 Electoral College Ratings.”   Amy Walter always does solid work and the entire report is a fascinating read, but this being New Hampshire Journal and not New Mexico Journal, we’re focused on the Granite State.

Which the Cook Reports rates as “Leans Democrat.”

Really?  Just “leans?” Given the GOP’s terrible track record at the POTUS level, it looks more like “about to fall over.”

Like many analysts, Cook uses the categories Solid, Likely, Leans and Toss-up.  Massachusetts is a “solid” for the Democrats (of course) while Florida is now and forever in the “toss-up” category.  But why isn’t New Hampshire in the “likely Dem” column–at least?

“Charlie Cook’s good at his job, but I think this is a bit of wishful thinking,” New England GOP consultant Pat Griffin told NHJournal. “Assuming Trump is on the ticket–and that’s no sure thing with Mueller still out there– it’s hard to see how Democrats don’t put New Hampshire in their ‘win’ column.”

For one thing, despite all the talk about New Hampshire as a “purple” or swing state, only one Republican presidential candidate has carried it since 1988: George W. Bush in 2000.  Republicans are 1-for-7 since, and both Bushes went on to lose New Hampshire as incumbents.

By comparison, Cook lists both Colorado and Virginia as “likely Democratic,” states where the GOP is tied (4-for-8  in Colorado) or has a winning record (5-for-8 in Virginia) since 1988.

Isn’t New Hampshire at least as likely to vote Democrat in 2020 as they are?  Isn’t it more accurate to say New Hampshire is blue state at the national/federal level, but still flashes bits of purple for state and local offices?

Dante Scala, an associate professor of political science at UNH, doesn’t agree. “‘Lean Democrat’ sounds right to me,” he told NHJournal. “It’s true that Democrats have been on a win streak, but interestingly–relative to their percent of the national popular vote– Obama and Clinton did no better here in New Hampshire than John Kerry.”

Perhaps. Still, it’s hard to argue that Republicans are on the rise in a state whose entire congressional delegation is Democratic and where Democrats controlled the governor’s mansion 18 out of the 20 years before Sununu’s 2016 win.

Then there’s the Trump factor. Despite coming within 3,000 votes of Hillary Clinton here, the monthly Morning Consult tracking polls have never had him above 45 percent approval.  The general consensus is that anti-Trump sentiment powered the #BlueWave the swept the GOP out of power in the state legislature.

Which means, given the 86 percent track record Democrats have winning the Granite State’s four Electoral College votes, it’s hard to see how New Hampshire is anything but a “likely” pick-up, yet again, for the Democrats.

Now the question is: What will New Hampshire Republicans do about it?