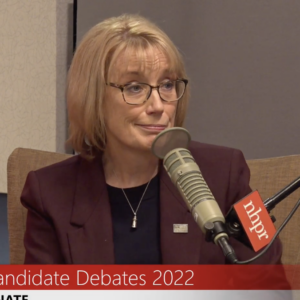 Sen. Maggie Hassan defended her campaign strategy of eschewing town halls and public engagement in favor of private, tightly controlled campaign events by arguing she talks to plenty of New Hampshire voters while doing her shopping.

“I shop at Market Basket. I go to Dunkin’ Donuts,” the senator said.

Hassan commented on a contentious debate with her GOP opponent, retired Gen. Don Bolduc, hosted by New Hampshire Public Radio on Thursday. Hassan demanded the left-leaning media outlet host one of the three debates, releasing her debate schedule before the GOP primary had even been held and refusing to negotiate — or even speak with– the Bolduc campaign.

Controversy continued to swirl around the event for days as members of the media called out Hassan’s debate schedule that snubbed local talk radio and newspaper-sponsored debates commonly part of previous campaign cycles. Republicans also noted the political bias of an event moderated by an NHPR reporter and a journalist who, until recently, had been a “Writing Fellow in Global Feminism” for Bitch Media.

Once the debate began, however, it covered familiar ground — inflation, abortion, energy prices, and election integrity. The two candidates gave largely the same answers they have given throughout the campaign. Hassan continued to claim, still without substantiation, that Bolduc supports a national abortion ban. Bolduc called her a liar and repeated yet again that he embraces the traditional GOP position that abortion law should be left to the states.

“I support New Hampshire’s law. I support Granite Staters. She lies,” Bolduc said, adding that he “told Mitch McConnell and I have told Lindsey Graham” he was a no vote for a federal abortion law overriding the states.

Asked if she supports any limits on legal abortion, Hassan again declined to answer directly, instead saying there “is no place for the government” in the decision. And she repeated her support for a national federal law, the Women’s Health Protection Act, which would force states like New Hampshire to allow abortions at any point in a pregnancy.

To pass the law, Hassan supports ending the filibuster, though she claimed during the debate she would level it in place for other issues. Few political observers believe an “on again, off again” filibuster is a realistic proposal.

Hassan has made election integrity part of her closing pitch to voters, holding a rare press conference Wednesday to attack Bolduc over his claims the 2020 election was stolen from former President Donald Trump. Asked about his contradictory record, Bolduc used the question as an opportunity to say he had been wrong about 2020 and now believed Biden had won the election process. “I’m not a politician,” Bolduc said. “I admit my mistakes. That’s something she will never do.”

But Bolduc followed up by repeating the widely disputed claim that “school buses loaded with people” were rolling into New Hampshire to illegally cast ballots. When moderator Josh Rogers of NHPR followed up, Bolduc argued that it didn’t matter if it actually happened; what matters is many Granite Staters believe it.

“I am claiming that is what Granite Staters tell me. And I am saying we need to respond to that. I think it’s valid.”

Moderator Josh Rogers of NHPR asked Hassan about her unwillingness to hold public campaign events, contrasting her campaign style to Bolduc, who is “holding lots of open events, taking lots of questions from whoever shows up.”

“Your approach has relied on a tightly-controlled approach where events are often effectively private,” Rogers noted. Asked how this reflects the values of New Hampshire politics, Hassan replied, “I’m out and about talking to Granite Staters all the time. I shop at Market Basket. I go to Dunkin’ Donuts. I hear from a lot of Granite Staters, both positive and negative.”