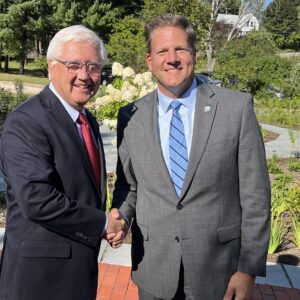 President Donald Trump is known for bragging about his record of success endorsing in GOP primaries this election cycle. He has endorsed in nearly 200 Republican races in 39 states and claims a winning record of 92 percent.

Compare that to New Hampshire Gov. Chris Sununu, who made high-profile endorsements in the U.S. Senate and Second Congressional District primaries. He has also been openly critical of several members of the New Hampshire House Republican Caucus, and a pro-Sununu political action committee also targeted those GOP House members as well.

Sununu has often said he does not believe endorsements matter, and he seemed to prove himself right Tuesday night. His endorsement was not enough to get state Senate President Chuck Morse or Keene Mayor George Hansel over the line in their federal races.

For Reps. Max Abramson (R-Seabrook), Norm Silber (R-Gilford), and former Belmont County delegation chair Mike Sylvia (R-Belmont), Sununu’s efforts were enough to help take them out. Granite PAC spent nearly $27,000 against the six representatives who were a thorn in Sununu’s side for the past two years and only succeeded in unseating three.

Sylvia’s defeat in his party’s primary is particularly notable. He led the push for a House vote on a bill related to New Hampshire seceding from the union, an effort many Republicans in Concord found embarrassing. Sylvia was also a key figure in the turmoil at Gunstock Mountain Resort, a battle he lost to Sununu and his allies.

Another contingent more friendly to Sununu and willing to buck House leadership took some hits as well. That was not good news for a governor who needs all the help he can get in the House caucus.

Rep. Jim Allard (R-Pittsfield), leader of what some in the House call the “Allard Caucus,” was defeated by Cyril Aures and Clayton Wood, two new candidates who stepped up, angry about Allard’s voting record. Allard voted against Right to Work, tanked Education Freedom Accounts in the House Education Committee, and worked against other priorities pushed by House Majority Leader Jason Osborne (R-Auburn).

Another Rep., Brodie Deshaies (R-Wolfeboro), was ousted in a four-for-two primary losing to newcomer Katy Peternel (R-Wolfeboro) and incumbent John MacDonald (R-Wolfeboro). Deshaies and MacDonald ran as a slate, both receiving the endorsement of Sununu, but Deshaies voted against Right to Work legislation while MacDonald supported the measure.

Editor’s Note: A previous story on Rep. John MacDonald incorrectly stated that he voted against the Right to Work legislation. It has subsequently been corrected. We regret the error.