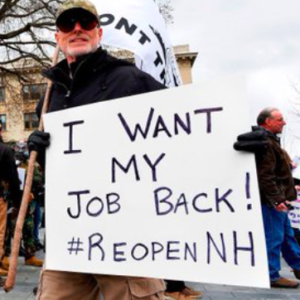 In NH, The Coronavirus Class-Warfare Divide Is on Display

Saturday’s #ReOpenNH event at the statehouse could have easily been mistaken for a Trump rally– but not because of partisan politics.

Instead, there’s a pragmatic reason that Trump supporters tend to also be more motivated to push for the Granite State economy to reopen. They are the same working-class Americans who’ve been hit hardest by the economic impact of the coronavirus lockdown, at both the national and local levels.

Nationwide, “up to one-third of American jobs may be vulnerable,” due up to the lockdown, says a report by the international consulting firm McKinsey. “And more than 80 percent are held by low-income workers.”

According to the Bureau of Labor Statistics, while 60 percent of workers in the top 25 percent income group have jobs that can be done remotely, just one in ten in the bottom bracket can say the same.

Pew Research found the divide extends to academic attainment as well: “About three-quarters of working-age adults with a post-graduate degree say they have worked from home as a result of the coronavirus outbreak, as do 62 percent of those with a bachelor’s degree.” Just 22 percent of workers with a high school diploma or less say they’ve worked from home.

The Dartmouth College-UNH Survey Center poll found a similar gap: Just 13 percent of Granite State workers with a high school degree have worked from home, while nearly three times as many college grads (38 percent)  — plus 60 percent of people with post-graduate studies — have done so.

No wonder Trump’s blue-collar, working-class base is angry. And if the brutal economic impact doesn’t rile them up, the attitude of the people who disagree with them will likely do it.

Because, despite the economic devastation of the coronavirus lockdown, the protesters pleading for relief from the lockdown are largely being dissed or dismissed by the mainstream media and the Democratic Party.

When Fox News’ Chris Wallace asked Speaker of the House Nancy Pelosi if she could understand why business owners and workers were protesting, she replied, “No, not really.”

In New Hampshire, state Rep. Rosemarie Rung (D-Merrimack) re-tweeted photos of the rally in Concord and the question, “Do they think their guns will kill the virus? #DarwinAwards” (A reference to a meme regarding people so stupid they endanger their own lives.)

Her fellow Democrat, Rep Debra Altschiller of Stratham, called the rally a “group temper tantrum” and an “idiot parade.”

And comedian Patton Oswalt sparked a national reaction with the comment, “Anne Frank spent 2 years hiding in an attic and we’ve been home for just over a month with Netflix, food delivery & video games and there are people risking viral death by storming state capital buildings & screaming, ‘Open Fuddruckers!”

The protesters’ reply? We don’t want to eat at Fuddruckers. We want to work there.

“I showed up at Saturday’s rally with a shovel. Why? Because I wasn’t there for me, I was there for the folks who work with tools for a living. They’re the ones who are being hurt,” former state rep. JR Hoell, one of the events’ organizers, told NHJournal. He also sees a class divide in the consequences of the shutdown in New Hampshire.

“I was talking to a guy who services furnaces who, because of the lockdown, can’t get work. That’s an important job in this state. Until the lockdown ends, he’s out of a job. He doesn’t want a handout. He wants to work.”

For decades, Democrats were the party of the people “who just wants to work,” America’s blue-collar, working class. Not anymore. Trump handily defeated Hillary Clinton among those voters in 2016.

The condescension and lack of empathy currently on display toward these people aren’t likely to change that. Instead, it looks like Democrats are going to learn their “basket of deplorables” lesson all over again.