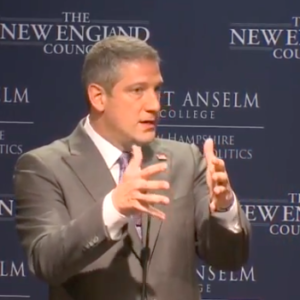 “Workers are hurting, people can’t find affordable housing, the criminal justice system is racist and women are being attacked over their own healthcare,” Ryan said. “You see what we’re doing to our kids, our communities? They’re falling apart. There’s blight everywhere!”

Ryan, often described as a Midwestern moderate, dismissed talk of “the stock market going up and unemployment going down” as disconnected from the voters he represents. “Go to Ohio–the factories are shutting down. People have got two jobs, they’ve got three jobs.  The people who used to make $30, $40, $50 bucks an hour are now making $15 bucks an hour.

“We feel forgotten. We feel like we don’t matter,” Ryan said, before promising that “the forgotten souls of the United States…will be forgotten no more.”

The similarities to Trump’s “American Carnage” inauguration speech are hard to miss. As one New Hampshire Republican told NHJournal: “It looks like [Joe] Biden’s not the only one with a plagiarism problem.”

Ryan’s dire warnings reached far beyond the economy. He claimed that “farmers haven’t made a profit in five years” and that agricultural pesticides “have poisoned our soil” and “are making us sick.” He says people are “trapped in high-crime communities,” and half of all students “come to school in trauma” from poverty, divorce and other forces.

He even threw down over the college admissions scandal. “Elites from the coasts are buying their kids into schools and knocking other working-class families out,” Ryan said.

All in all, the 45-year-old congressman offered a bleak assessment of the current state of the American heartland, one at odds with the available economic data showing low unemployment, rising wages (particularly for blue-collar and non-college-degree workers) and the highest average household income in at least 50 years, even after adjusting for inflation.

As for those “Ohio factories,” the Buckeye State actually added another 3,000 manufacturing jobs over the previous year.

As economist Mark J. Perry of the American Enterprise Institute told NHJournal: “In April there were 7.45 million job openings compared to 5.82 million unemployed Americans, for a worker shortage of 1.625 million workers. The violent crime rate is about half of the rate in the early 1990s, and as of June, we’re now in the longest economic expansion in U.S. history at 121 months.

“Based purely on the available economic data, it appears Rep. Ryan is running for president in an alternate universe,” Perry said.

Whatever the actual extent of the problems, Ryan’s solutions are aggressive, to say the least. He wants a nationalist industrial policy, with the government pushing aggressively into the economy–the electric vehicle and green energy sectors in particular– and forcing investment into the “forgotten” communities of the Rust Belt and coal country.

“There will be 30 million electric cars manufactured in the next ten years,” Ryan said, “and I want them made in the U.S. The charging stations, the batteries, I want them made here, too. Who controls that market now? China.

It’s not quite a five-year plan from the Politburo, but it’s close. In a sense, Ryan’s approach is just a more specific version of the industrial policy behind the Green New Deal. It’s also at odds with other statements he’s made in defense of free markets. “We can’t be hostile to the free-enterprise system,” he said. “That’s how we get past China.”

For a candidate who claims to be “concerned” over the rising popularity of socialism in his own party, a Soviet-style industrial policy would appear a bit unorthodox. If so, it fits right in with another of Ryan’s key agenda items: non-traditional medicine.

An audience member asked Ryan about his embrace of “mindfulness,” which the congressman described as “a meditation practice where you train your mind to be in the present moment.” Ryan created the “Quiet Time Caucus” in Congress and leads mindfulness sessions. He believes transcendental meditation, yoga and other “contemplative practices” can “boost your immune system and help with a myriad of problems like high blood pressure and heart disease.” He also wants the practices to be used in public schools to improve test scores.

Listening to Ryan promote contemplative practices and denounce the use of pesticides, it’s not surprising to learn he’s been linked to the “vaccine skeptic” community. (Ryan’s campaign told Mother Jones he’s a supporter of mandatory vaccinations.)

What is truly surprising is that, despite championing policies well outside the mainstream, Rep. Tim Ryan continues to be touted as a “moderate.”