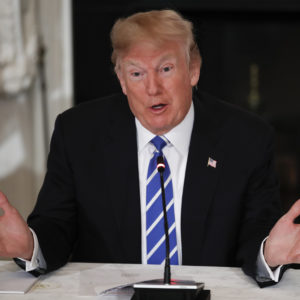 In N.H., Trump Trails Top-Tier Democrats In Poll Match Up

In the First-in-the-Nation primary state of New Hampshire, Donald Trump is trailing three high-profile progressive Democrats in the 2020 race. That’s the finding of the latest NHJournal Poll of Granite State voters—taken before Trump’s backdown in the government-shutdown fight with Speaker Nancy Pelosi over border wall funding.

This survey, conducted via landline IVR and online polls of 593 registered voters in New Hampshire, has a margin of error of +/- 4.0%.

In addition, how Democrats view their own party has shifted drastically during the Trump years.  When asked which of three prominent Democrats best represent the Democratic Party of today, just 17 percent of New Hampshire Democrats picked the party’s 2016 nominee Hillary Clinton, while 28 percent picked Rep. Alexandria Ocasio-Cortez and a solid 55 percent majority picked Sen. Elizabeth Warren.

“The fact that so many Democrats in New Hampshire see Sen. Warren as an accurate reflection of their party isn’t that surprising given the fact that she’s from the neighboring state of Massachusetts,” says Shawn McCoy, a former GOP campaign strategist who serves as publisher for NH Journal. “But the fact that Hillary Clinton, an icon of the party for 30 years, trails a progressive activist newcomer like Rep. Ocasio-Cortez is astonishing.”

President Trump’s approval rating has fallen to 35.6 percent, down from 41-54 percent in the August NHJournal poll.  While Trump’s support remains strong among Granite State Republicans (80 percent), his approval among independents (unaffiliated) voters—who make up the largest bloc voting bloc—has plunged from 40-53 percent in August to 25-65 percent today.

Another area of concern for Trump is the fact that one-in-four likely primary voters would pick Utah Senator Mitt Romney over President Trump in a theoretical 2020 GOP primary.

“Trump’s margin (69-24 percent) may appear dominant, but it shows that a Republican challenger would likely start with a quarter of the vote as a base,” says McCoy. “In 1992, Pat Buchanan came to New Hampshire and landed what many believe was a damaging blow against incumbent George H.W. Bush with 37 percent of the GOP primary vote. Given that unaffiliated voters can participate in the GOP primary—and the president’s poor standing among them–any Trump challenger would have a large group of potential voters to draw from.”