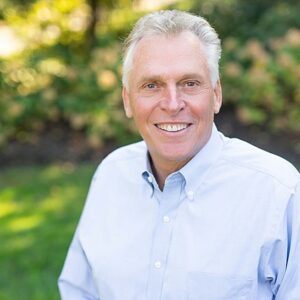 In Attacks on Edelblut, NH Dems Have Their ‘Terry McAuliffe’ Moment

Edelblut’s defense was simple: “I accepted the invitation to speak directly to parents on Sunday, not to speak to the NH Government Integrity Project.”

Edelblut’s words were largely lost in the political debate over extremism as anti-vax protesters shut down government meetings and the state’s Executive Council voted down federal funds for vaccine distribution. “Given this fringe group’s history and support of anti-government actions, the Commissioner’s decision to attend in his official capacity was inappropriate,” Sununu said.

But as the national conversation turns toward education and parental rights, the politics of Edelblut’s decision may change, too.

Edelblut, who says he has spoken to many groups of parents with all sorts of political views, says his job is to empower parents. “I absolutely believe parents should have the primary voice in educating their children, Edelblut told NHJournal Tuesday.

His Democratic critics have suggested that Edelblut’s efforts to empower parents who oppose policies of their local administrators and school boards are dangerous.

“In the Commissioner’s recent meeting, he praised agitators who have shut down school board meetings and encouraged parents to fight commonsense mask policies in schools,” Democrats on the House Education Committee said in a statement denouncing “Edelblut’s encouragement of anti-vax, anti-mask school board disrupters.”

Democrats say they’re so outraged Edelblut would speak to parents who might hold political views they find extreme, they want the Commissioner fired.  “It is time Governor Chris Sununu demanded Frank Edelblut resign from his position as Commissioner of Education,” said Executive Councilor Cinde Warmington (D).

The state Democratic Party has even filed right-to-know requests seeking records related to his appearance, as though speaking to concerned parents about the state’s education system would not be part of his duties as Education Commissioner.

New Hampshire Democrats’ comments about parents and school boards echo the views of Virginia gubernatorial candidate Terry McAuliffe, who’s currently in a neck-and-neck race in the Democratic stronghold of Virginia. (No Republican has won a statewide office there in 12 years.)

“I’m not going to let parents come into schools and actually take books out and make their own decision,” McAuliffe said. “I don’t think parents should be telling schools what they should teach.”

A Suffolk University poll released Tuesday found most Virginians disagree with McAullife. Among Republicans, 79 percent say parents should have more influence than elected school boards, and 57 percent of independents agree. Democrats back school boards over parents 70 percent to 16 percent.

And a whopping 73 percent of registered voters are “extremely” or “very” concerned about what public schools are teaching children.

New Hampshire Democrats’ have a long tradition of empowering education officials over parents. A Democratic majority on the Executive Council in 2019 voted to reject  $46 million in federal education funds for charter schools. Democratic legislators also tried to block the popular “Learn Everywhere” program allowing students to study in off-campus settings like the New Hampshire Academy of Science.

Today, Democrats are evading their stance on parental involvement by focusing on the views of the Government Integrity Project, or GIP. Members of the Windham-based GIP are known to engage in anti-mask and anti-vaccine mandate misinformation. The group got started by pushing misinformation about the 2020 election.

But, Edelblut supporters ask, does that mean the parents should be ignored by elected officials? If he’s asked to speak to parents who support the Black Lives Matter movement or espouse Socialism, should he stay away?

NHJournal posed these questions to the Democrats on the House Education Committee. They declined to respond.

Some Granite Staters have been supportive of Edelblut. In a Conway Daily Sun survey, 34 of the 40 respondents backed Edelblut on this issue.

“Mr. Edelblut has been diligent in his duties to be responsive to all citizens, regardless of their affiliations, wrote reader Nicole Nordlund. “These were parents, for God’s sake, inviting their elected representatives to come and SPEAK and they SHOWED UP. And folks and the governor are upset by this? That is ludicrous. I would hope that if a group of parents, here, wanted to hear from their representatives they would do their jobs and heed the call,” wrote reader Nicole Nordlund

While there have been some incidents of disruption at school board meetings, many Granite State parents —  frustrated by a lack of communication from school boards — have been voting with their feet. More and more New Hampshire families are choosing homeschool, and the state’s new Education Freedom Accounts has more than 1,500 participants in the first year.

“That doesn’t respect the role of parents in New Hampshire,” he said. “Parents should be the primary caregivers and educators, they have that primary responsibility.”