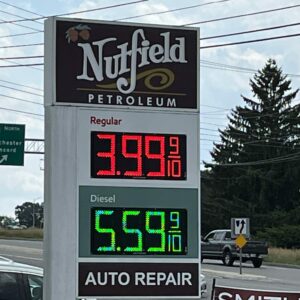 If High Prices Are Gas Station ‘Gouging,’ Why Are Costs Going Down Now?

While gas still costs twice as much as it did when Biden was sworn in, the price has been steadily falling for a month. The New Hampshire average on July 17 was $4.55 and the national average was $4.53. Some stations are selling gas below $4 a gallon for the first time since February 2022.

Did Biden’s bullying work? Or has the supply of gasoline recently surged? What is behind the declining prices?

“Honestly, I can’t figure it out,” said Phil Abirached, owner of the Metro Mart Exxon gas station and convenience store in Derry. “I just dropped it another 30 cents a gallon to $4.29, today,” Abirached said on Friday. “It’s mind-blowing. I don’t know why it’s going down 10 cents to 20 cents every day.”

While gas prices are now falling sharply in New Hampshire and across the country, it does not seem to be because of Biden. For example, his recent fist-bumping trip to Saudi Arabia failed to get the oil-rich nation to significantly increase its oil production.

The reason the price of unleaded gasoline has come down from a high of more than $5 a gallon a month ago to around $4.50 throughout the state is basic economics, experts say: Less demand today, and fears of a recession tomorrow.

“It’s changing, because people are driving less, that’s the big reason behind it,” said John Dumas, former president and CEO of the New Hampshire Grocers Association. “It’s supply and demand, that’s really all it is.”

Chris Ellms, New Hampshire’s Deputy Energy Commissioner, said there is now about as much refined gasoline available for the market as before prices soared. The falling prices are mostly tied to supply and demand.

“No national energy policy changes have led to the decreases we’ve seen recently, not for natural gas or oil production,” he said.

Global issues like the war in Ukraine, higher interest rates, and a stronger dollar, are all factors. But the available gas supply is largely unchanged. When consumption slows down, so do prices.

“A lot of the issues we have been seeing are related to a big spike in demand coming out of the COVID pandemic,” Ellms said. “There was a lot of demand without a corresponding rise in the supply. It’s really a supply and demand connection.”

It was certainly not local gas stations artificially raising prices, despite Biden’s claims. Most gas stations in New Hampshire are small, locally-owned businesses like Abirached’s store in Derry. Far from pushing higher prices, according to Jeff Lenard at the National Association of Convenience Stores (NACS), higher gas prices drive down local businesses’ profits. That is because stations cut into their own profits in an attempt to soften the price-hike blow.

And gasoline has never been the primary profit center for these businesses.

“Convenience stores, which sell an estimated 80 percent of the fuel purchased in the U.S., rely on in-store sales, not fuel sales, to drive profits,” according to a statement from the NACS. “But high gas prices are hurting customer traffic in stores and ‘basket’ size: Nearly half of all retailers (49 percent) say that customers coming inside the store are buying less compared to three months ago when gas prices were $1.50 a gallon lower.”

And yet New Hampshire elected officials continue to point the finger at the petroleum industry and local retailers. Both U.S. Reps. Annie Kuster and Chris Pappas are still pushing a so-called “anti-price-gouging” bill that would allow the federal government to declare an energy emergency and set prices for fuel.

Multiple investigations by both Republican and Democratic administrations have found no evidence of widespread price fixing for gasoline.

Meanwhile, The Washington Post reports economists fear another gas price spike could be coming this fall.

“Economists across the ideological spectrum warn that the measures the White House is promoting— allowing Russian oil into the global market at reduced prices, taxing oil company “windfall” profits, cutting the federal gas tax—could ultimately aggravate the energy crunch in the United States rather than ease it,” the paper reported. And, it said, when the most serious sanctions on Russian oil take effect later this year, the price of gasoline could surge above $6 a gallon.

Could the U.S. offset the impact by adding to global supplies? According to Reuters, the U.S. does not have the capacity to increase the supply by drilling more oil and gas.

“Capacity for U.S. oil refiners fell in 2021 for the second year in a row, the most recent government data showed (last month), as plant shutdowns kept whittling away on their ability to produce gasoline and diesel,” the news agency reports.

In the end, the price at the pump both reflects and influences the overall economy. Abirached said.

“We all became very aware of where we’re going and where [the economy] is heading. People are asking if it’s worth even turning the car on.”