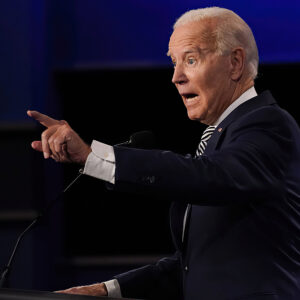 ‘I DIDN’T Do That!’ Biden Touting Portsmouth Dredging Project Funded by Trump

President Joe Biden came to Portsmouth Tuesday afternoon to tout his administration’s spending on the local harbor as part of the bipartisan infrastructure bill. In particular, Biden highlighted millions spent on dredging and widening the Piscataqua River turning basin just beyond the Port Authority.

“Prior to widening the turning basin, larger ships would have to wait to move until ideal conditions, which caused delays and drove up commodity costs that were then passed to consumers, such as through higher home heating oil prices,” noted a White House spokesperson. “Together, these projects will allow the harbor to safely and efficiently accommodate larger ships and heavier loads of cargo, benefitting the regional economy and lowering costs for consumers.”

Only one problem: The dredging project was paid for by the Trump administration.

Funding for the dredging project, which has already been completed, was in the “America’s Water Infrastructure Act of 2018,” passed by the GOP-controlled Congress with nearly unanimous support, with additional support in the “Water Resources Development Act of 2020.”

This discrepancy was noted by GOP candidate for U.S. Senate Kevin Smith, who was serving as chairman of the Pease Development Authority at the time. According to Smith, it was the 2020 law, and the attached timeframe, that led the Army Corps of Engineers to include funds for the project in their FY 2021 budget released on January 19th 2021, during President Trump’s administration.

“Unfortunately for Joe Biden and Maggie Hassan, they didn’t anticipate former Pease Development Authority Chairman Kevin Smith to look into the details of their claims about the massive economic engine he oversaw,” said campaign spokesperson Seb Rougemont.
It’s true the project received an additional $1.6 million from the bipartisan Infrastructure Investment and Jobs Act. But according to Smith, that’s like taking credit for cleaning the windshield after the car’s been repaired.
“President Trump is the one who stripped away red tape and government inefficiency and revived this longtime-planned project, not Joe Biden. As the former PDA Chair who oversaw the Portsmouth Harbor during this project’s time, I know who deserves what credit, and Joe Biden’s visit today is nothing short of political fraud,” Smith said.
Infrastructure spending is one of the few policy successes President Biden and his allies like Hassan and Rep. Chris Pappas can tout. The $5 trillion Build Back Better bill, which passed the House with Pappas’ support, stalled in the Senate. And Biden’s energy policy of killing the Keystone XL pipeline and banning new drilling on federal lands was abandoned by Hassan and Pappas weeks ago. On Friday the White House finally reversed course and ended the moratorium.
Energy isn’t the only issue dividing Biden and the Granite State delegation. Hassan and Pappas are both backing legislation to stop the Biden administration from ending the Title 42 authorization used to turn away more than 1 million undocumented migrants last year. And the Biden administration is also rushing through rules to restrict the number of students public charter schools can accept. Hassan, who claims to be a charter school supporter, declined requests for comment on whether she supports Biden’s charter school crackdown.
“American ports are a cornerstone of the U.S. economy, but outdated infrastructure and the COVID-19 pandemic have strained their capacity and jeopardized global supply chains – which has caused delays and passed costs directly to consumers,” reads a prepared statement from the White House. “As the President continues to use every tool to help bring down prices for Americans, investments that strengthen domestic supply chains and move goods faster and more efficiently will help lower costs for families.”
Smith’s response? “Here’s the reality. Joe Biden is desperately trying to deflect from his abysmal record. If disguising his reckless spending and record inflation means ripping off President Trump’s accomplishments, then I’m going to call BS when I see it.”