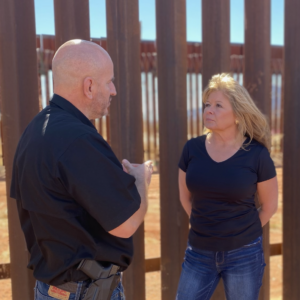 Recently, I was the first candidate in New Hampshire’s First District to join agents of the U.S. Border Patrol to tour our southern border. Unfortunately, this experience only confirmed what I feared – our immigration system is broken.

The Biden Administration’s open-border policies, supported by Congressman Chris Pappas, have created a national security and humanitarian crisis. Illicit drugs, illegal arms, and known criminals flood the border, ending up in New Hampshire, often destroying families and making us all less safe. At the same time, those seeking a better life in our country end up trafficked and exploited by Mexican cartels.

Remember this above all: Mexican drug cartels exist for a singular purpose – to make money. These organized crime operations make billions of dollars off innocent men, women, and children who want a better life in America.

Ten Mexican drug cartels are operating in Mexico currently. According to Brandon Judd, President of the National Border Patrol Council (NBPC), the cartels charge $6,000 to $10,000 to “help” immigrants, who in reality are victims, cross from Mexico into the United States illegally. Many of these victims are young women who spend up to three years paying off their $10,000 debt to the cartel through sex trafficking.

Another way the cartels make money is by smuggling drugs into America – our government seized 634 pounds of deadly fentanyl and 12,500 pounds of methamphetamine in February alone. Imagine what we don’t catch?

Currently, the most profitable drug is fentanyl because it is efficient to manufacture and easy to smuggle. Now used to lace marijuana, methamphetamine, and even prescription drugs like Adderall, it is the most dangerous narcotic threatening New Hampshire families and law enforcement. Many of these smugglers game our system by claiming “asylum.” Under our current immigration policy, those “asylum seekers” are released into our country on a promise to return for a future hearing – few ever return. As it stands now, more than 500,000 illegal immigrants have disappeared into our country during Biden’s presidency.

People hired to smuggle drugs into Texas, New Mexico, Arizona, and California are provided transportation by the cartels to run deadly fentanyl up and across the country to New England. These cartels are finely tuned, well-financed criminal enterprises, and their victims, all too often young children, span both sides of the border.

Right now, Congress is holding hearings about America’s rapid rise in drug use and overdose deaths among teens. I beg them to look to the border and see that deadly illegal drugs are flowing into the United States at the highest rate ever. Recently, a 13-year-old boy in Connecticut died from a fentanyl overdose – right in the school’s gymnasium. After his death, several dozen bags of fentanyl were found in his school. This fentanyl is 80 – 100 times more potent than morphine.

Politicians on the left, like Joe Biden and Chris Pappas, want to make immigration policy a matter of identity politics, but when I talk to families dealing with addiction and overdoses here in New Hampshire, the conversations aren’t political. And, when I talked with border patrol agents, partisanship and politics were absent.

The agents I spoke with offered practical solutions to help them better perform their important work, and, like so many in law enforcement today, they feel caught in the middle of an unwelcome political fight. Privately, they shared the concerns for their families, knowing they are under-resourced and, just two days before my arrival, received threats that the cartel would begin assassinating agents.

So here’s what we can do.

First, let’s listen to our front lines in law enforcement – we have to face the gruesome facts and leave the politics behind. Let’s give these agents the personnel and technological resources they need to keep us safe. Let’s enforce the “Remain in Mexico” policy and abandon a phony and unrealistic “asylum” policy that is full of loopholes. Let’s finish building the wall. Where there is a wall, the apprehension rate is 80%. Where there is no wall (referred to as the “wild west”), the apprehension rate is only 30%. 164,973 illegal immigrants were apprehended attempting to cross the United States – Mexico border last month, the highest total for February in 22 years. Imagine how many criminals and smugglers our law enforcement didn’t apprehend?

Most importantly, let’s send the right message. When we get serious about fixing our immigration policy and securing our border, we will incentivize legal immigration and discourage criminal enterprise.

Gail Huff Brown is a candidate in the Republican primary in the First Congressional District. She wrote this for NHJournal.com.