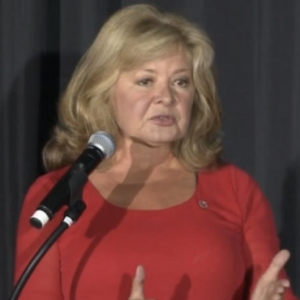 Also in attendance was retired Brigadier General Don Bolduc, who is running against U.S. Sen. Maggie Hassan, who made the case for his candidacy over other unnamed and, so far undeclared, Republicans. Gov. Chris Sununu is considered likely to enter the race.

The Common Sense Leadership Fund announced a multi-million campaign earlier this year to take on Hassan, and Tuesday’s event was an opportunity for the candidates to score points criticizing the Democratic-backed $3.5 trillion spending package making its way through Congress.

Spending proposed by Democrats will add money for daycare, dental care, college tuition, and other social benefits that Mowers called a “socialist spending spree.” He made an at times emotional case against the spending package, mentioning his grandfather, Pop Pop, and his newborn son, Jack, as reasons for opposing the spending plan that he says is being pushed by Democratic Party elites like House Speaker Nancy Pelosi.

Huff Brown said the proposed spending will bankrupt the country and is being pushed by liberals who are out of touch with reality. She continued to liken them to children who don’t understand parents need to balance the books.

Mowers, a former State Department employee in the Trump administration, was the only potential candidate to criticize the Biden administration’s handling of the Afghanistan withdrawal.

“We have Americans grounded in Kabul right now,” Mowers said. “(Biden’s) incompetence has led to this.”

“I was born and raised in New Hampshire,” Leavitt said in her opening remarks.

Leavitt, who is 24, made the case that the GOP needs to reach out to young people in order to save the future of the party. She noted the majority of people age 18-32 voted for Biden in last year’s presidential election.

“We have an entire generation of Americans who hate America,” she said. “We have to change the minds with young voters now.”

The 1st Congressional District seat is seen as a potential pick-up for the GOP, particularly once the Republican-controlled legislature redraws the district lines.

The uncertain shape of the district could also be keeping some candidates out of the race, for now. A well-placed Republican attending Tuesday’s event speculated other potential candidates with more financial backing are waiting to see the redistricted map. Those candidates may decide to get into the race if it looks more like a sure thing.

The district’s new map could impact other races as well. If Sununu decides to run against Hassan, a race that national GOP leaders are hoping for, Pappas could switch to run for governor. A district that is tilted more to the GOP might give Pappas the impetus to change races, the GOP source said.

The low-key event began with the emcee, Nashua Republican City Committee Vice Chair Di Lothrop, cautioning people there were no public bathrooms available in the historic building. Turnout was disappointing, with fewer than 50 people in attendance including candidates and their staff.

Some blamed the small crowd on the fact that the NHGOP’s rally against President Biden’s vaccine mandate was happening 40 miles away in Concord. “There were at least 500 people up there,” Acciard said.