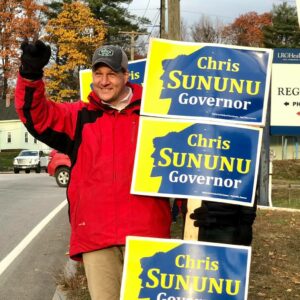 How NH Candidates and Campaign Pros Spend Election Day — And Why They Hate It.

To voters, it is the day the endless campaign commercials finally come to an end, the day they can go to the mailbox without being assaulted with attack ads. After months of being talked to, put upon, and yelled at by politicians, it is the day the voters get their chance to talk back.

It’s Election Day. And for many of the people who work in the campaign business, it’s a day they dread.

“Election day is the worst day of the cycle,” says former campaign flak Alicia Xanthopolous. “There is nothing you can do. Whatever you’ve done, you cannot change. And anything you do will have no effect on the outcome.”

Typical voters — or as campaign hacks sometimes call them, “civilians” — assume that Election Day is like the helm of the ship in the midst of battle: Non-stop activity and crisis management. But while the candidate has plenty of stops to make and the volunteers are out getting voters delivered to the polls, for the people who put the campaign plan in place, there is often little to do but wait to see if it worked.

For the strategists, consultants, and flaks, the day of the election is like the eye of their political storm. Eerily quiet, but with potential disaster looming. Which can make for a long, nerve-wracking day.

As a result, some campaign pros have strategies for dealing with the dreaded E-Day.

Xanthopolous puts her nervous energy into productive work. “I tend to mop my floors to keep busy and drink my tea slowly — until the time is acceptable for a glass of Merlot.”

It is not just the staff, either. Some politicians have Election Day rituals to burn off nervous energy or give them good luck.

Former President Barack Obama played basketball on every Election Day during the 2008 primary — except one: The New Hampshire primary. Which he lost in a surprise upset to Hillary Clinton.

“We made the mistake of not playing basketball once. I can assure you we will not repeat that,” Obama aide Robert Gibbs said afterward. Obama continued the tradition through the 2016 general election, shooting hoops at the White House to help bring good luck to Hillary. (It didn’t.)

William McKinley could be spotted every Election Day sporting a lucky red carnation in his lapel. The 25th president had been given one by a friend and political opponent the first time McKinley ran for Congress. He won and became convinced the red flowers brought him luck. As president, he kept bouquets of them in the Oval Office.

McKinley wouldn’t be caught dead without a red carnation, until one day while greeting supporters in Upstate New York and a little girl asked for the flower from his lapel. Reluctantly the president unpinned it and handed it over. A few minutes later at the same event, he was shot by his assassin, Leon Czolgosz.

“On Election Day I would drive around to various polling places and express my appreciation for all the folks who took the time to hold signs for candidates — including for my opponents,” said former U.S. Sen. Judd Gregg (R). “I usually started at Ward 2 in Nashua because that is where Kathy [his wife] and I first ran from. Then I would work my way around the state. It was very pleasant and made the day go faster.”

“It’s a terrible day to schedule,” confesses Tom Rath, dean of Granite State political pros. “The candidate has to vote — usually with family — typically greet some voters, make some calls and generally drive the staff crazy.

Ethan Zorfas of Axiom Strategies is working on Republican Karoline Leavitt’s campaign in the First Congressional District, and he offers some pragmatic advice: “Go have a big lunch – cause you ain’t eating dinner.”

Griffin has another common Election Day ritual, one he shares with the late Sen. John McCain: Go to a movie. “He always goes to a movie on election day,” daughter Meghan McCain said in a 2008 interview. “He usually goes in the early afternoon,” one of his Election Day superstitions.

Griffin says he did it all the time.  “Just me, phone turned off, and no one else. A 2:00 p.m. matinee made the afternoon pass quickly. Although sometimes I was so beat in the run-up to Election Day, I might have dozed off.”

New Hampshire campaign vet Dave Carney, who is helping Gov. Greg Abbott in Texas this year says, “I always get a hot towel shave and haircut.

“Besides answering calls from voters on where they might vote I spend most of the time on the phone talking with others hacks about turnout, how rain or snow might impact turnout, and lying to each other about what we think the results will be.”