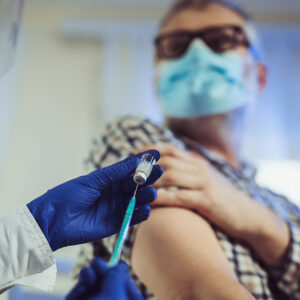 House Republicans are pushing several proposals to curb COVID-19 vaccine and mask requirements, including banning private businesses from requiring a shot for employees. But New Hampshire’s healthcare professionals are pushing back — hard.

“A vaccination mandate should be job-related and consistent with business necessity,” says Pamela DiNapoli, executive director of the New Hampshire Nurses Association.

And New Hampshire Hospital Association President Steve Ahnen points out, “Hospitals have an inherent responsibility to protect the health and safety of their patients who, by their very nature, are very ill and the COVID-19 vaccine is the most effective way we can do that.” He objects to any legislation that would “essentially render moot any requirements that an employer has determined are in the best interests of those they serve by simply saying no to the vaccine requirement on the grounds of a conscientious objection declaration.”

The debate, which is dividing some in the business community from their traditional Granite State GOP allies, comes down to whether business owners should be free to set their own rules for employees, or if employees should have the right to ignore workplace rules regarding vaccinations.

“People say businesses have a right to do that, but they don’t have the right to get involved in people’s medical,” said state Rep. Al Baldasaro (R-Londonderry).

Baldasaro is sponsoring a number of proposals, including HB 1224, which would prohibit state and local governments from having any vaccines requirement, and it would prevent what he says is discrimination against people who have not been vaccinated against COVID-19.

Dozens of bills related to the COVID-19 vaccine were filed at the start of the session, though many in the State House think they will get narrowed down to a few laws that will make it to Gov. Chris Sununu. Among proposals under consideration is House Speaker Sherman Packard’s own HB 1455. It would prevent state enforcement of any federal vaccine mandate and limit the number of times a person can be required to get a COVID-19 test to once a month.

“I am not against the vaccine in any way shape or form,” Packard (R-Londonderry), said when he introduced the bill. “What I’m against is the mandate from Washington D.C.”

There are also efforts to allow people to more easily opt-out of the state’s new vaccine registry. Another bill would stop employers from requiring COVID-19 tests while yet another would make people who lose work due to vaccine refusal eligible for unemployment benefits.

Many in the state are opposed to bills that would ban mandates. The New Hampshire Hospital Association told lawmakers that requiring vaccinations in healthcare settings is “absolutely the right thing to do.”

“Requiring vaccinations of healthcare workers from communicable diseases is not new for hospitals in New Hampshire. Hospitals have required vaccination against several communicable and deadly diseases such as mumps, measles, rubella, chickenpox, diphtheria, tetanus, pertussis, and influenza as a condition of employment, with the same type of medical and religious exemptions allowed for COVID-19 vaccines,” the New Hampshire Hospital Association said in written testimony.

Tom Cronin, director of government relations for the University System of New Hampshire, said in a letter to lawmakers that HB 1490 would prohibit the enforcement of any vaccine requirements on a college campus. Long before COVID-19, most campuses required students to be vaccinated against measles, mumps and rubella, meningitis, and chickenpox, Cronin noted. The bill also prevents colleges from requiring mask-wearing and other measures shown to limit the spread of COVID-19.

“Legislation that would permit individuals to disregard well-founded public health guidance, such as requirements to wear face coverings in busy, indoor spaces, undermines efforts to mitigate the spread of the virus on our campuses,” Cronin wrote.

The New Hampshire Nurses’ Association is also opposed to the proposals limiting employer mandates for the vaccine and masking requirements.

“By prohibiting employers and places of public accommodation from adopting mandates, that would otherwise protect employees from the transmission of COVID-19, has the potential to cause death or serious physical harm to vulnerable populations requiring such protections,” the New Hampshire Nurses’ Association said in a letter to lawmakers.

Republicans reply they don’t oppose the vaccine or mask-wearing, just the mandates. President Donald Trump, viewed by some as a vaccine skeptic, recently announced he is fully vaccinated and has received the booster.

Baldasaro, who is not vaccinated, said people need to be free to not undergo any medical procedure that they do not want.

“I believe that goes against their privacy,” Baldasaro said.

He said he still suffers ill effects from the medications and vaccines he was required to take while a member of the United States Marine Corps.

Another proposal, HB 1358, would eliminate COVID-19 testing as an employment requirement while at the same time making it easier for employees to get an exemption from the vaccine. Again, the New Hampshire Nurses’ Association disagrees with this approach.

“Restricting evidence-based testing requirements and/or allowing conscientious objector exemptions may significantly inhibit employers’ ability to maintain a safe work environment while putting vulnerable and immune-compromised individuals at risk,” according to the association.

Packard said the issue for him is the federal mandate, which he believes is a major overstep.

“I encourage people to get vaccinated, but I will not be blackmailed by the federal government,” he said.

President Joe Biden pushed for a federal vaccine mandate, using the Occupational Safety and Health Administration to enact the mandate. That effort was rejected by the courts, including the United States Supreme Court, and the OSHA mandate was withdrawn.