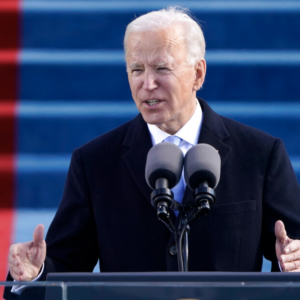 No matter how you look at it, 2021 was a bumpy ride for President Joe Biden. Washington pundits are already declaring his agenda D.O.A., and at least one says Biden’s had the worst first year of any president. Ever.

In the current era of political hyperbole and 24/7 cable news commentary, such a claim is hardly a surprise. But from the standpoint of history, it has to be labeled #FakeNews.

Looking for a rough rookie presidential year? Try William Henry Harrison. He stood in bitingly cold weather without a coat or hat and delivered a two-hour inaugural address, the longest in history. It was hardly a surprise when the 68-year-old died of pneumonia 31 days later, the shortest presidency in history. (The evidence suggests a longer Harrison administration wouldn’t have been any prize.)

But Harrison’s short-lived presidency can be dismissed as an outlier. Not so with President Bill Clinton.

Widely viewed as a political wizard later in his career, Clinton’s first year in office was almost amateurish. His first two nominees for attorney general went down in flames over not paying their nanny’s Social Security tax. He ran afoul of the military’s big brass over whether openly gay Americans should be allowed to serve in the military, resulting in the embarrassingly convoluted — and highly ridiculed — “Don’t ask, don’t tell” policy.

Clinton announced early on he would raise taxes (always a crowd-pleaser in the polls), and he pushed his tax-hiking 1993 budget through the House with just a 218-216 margin. His Department of Justice’s calamitous raid on the Branch Davidian compound in Waco, Texas, left 75 people dead.

Travelgate and Troopergate were born, and a controversial healthcare reform commission headed by first lady Hillary Clinton was launched with the same fanfare the Titanic received when it set sail… and ultimately suffered a similar end.

But most historians agree the president who suffered through the absolutely worst first year of all was Abraham Lincoln.

Elected with just 39.8 percent of the popular vote in an election where turnout topped 81 percent, seven states had left the Union to create their own country before he’d even taken office in March 1861. His early attempts to keep more states from seceding left him looking weak.

Lincoln’s presidency was born in war (the first shots of the Civil War were fired on Fort Sumter just before sunrise on April 12, 1861) and began with few successes. Union forces were soundly defeated at Manassas, Virginia and Wilson’s Creek, Missouri in the war’s first major battles.

Then there were the political gaffes and diplomatic stumbles. The secretary of war (forerunner of today’s secretary of defense) was openly corrupt. When a Union general freed slaves in Missouri without authorization from Washington, Lincoln quickly rescinded the order to avoid escalating tensions in the crucial border states. He lost much support among abolitionists for that.

His administration bungled badly by declaring a naval blockade of Southern seaports. Under international law, a nation can only declare a blockade against another nation. Britain seized on that to grant the South belligerent status, one step shy of full diplomatic recognition. (John F. Kennedy avoided repeating that blunder a century later when he announced a “naval quarantine” instead of a blockade during the Cuban Missile Crisis.)

Worst of all, in late 1861 a U.S. warship stopped a British commercial steamer on the open sea. Two Confederate diplomats bound for England and France were seized at gunpoint and tossed into a Boston prison. Lincoln looked decisive to Northerners but infuriated Britain. Her majesty’s government demanded the emissaries be immediately freed—then sent 12,000 British soldiers to neighboring Nova Scotia as a reminder Washington was dealing with a global Superpower. Faced with the real prospect of wars on two fronts, Lincoln humiliatingly released the pair in December. Lincoln’s support nosedived.

Biden’s first year the worst ever? Not even close.

At the same time, it’s hardly been a resounding success, either. And as bad as it’s been, many political observers expect it to get worse: His party’s almost certain to lose control of at least one chamber of Congress, his vice president is pulling down his poll numbers and few D.C. insiders expect Biden to run again. Once it’s clear he’s a lame duck, his political influence will fall even farther.

So while Joe Biden didn’t have a great first year of his presidency, the irony is it may turn out to have been his best.