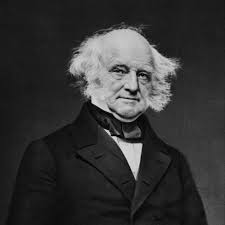 It will happen billions of times today. From Belgium to Botswana and Bolivia to Belize, people around the globe will all say the same word. It’s American, one you learned as a toddler, and has only two syllables. It’s also the most spoken word in the entire world.

The word is OK.

And believe it or not, we have an obscure U.S. president to thank for it, too. Here’s how it happened.

Martin Van Buren was a lot of things. Elegant and refined, he dressed in the height of fashion for his day. A self-made man, he grew up in a modest household where Dutch was the primary language, though it didn’t stop him from becoming governor of New York, ambassador to Britain, and secretary of state. He was the third person to be elevated straight from the vice presidency directly to the top job (and the last until George H.W. Bush pulled it off in 1988).

Van Buren also had two nicknames. Because he was a shrewd, masterful politician his opponents derisively called him the “Little Magician.” But his admirers had a kinder, gentler name. They affectionately called him “Old Kinderhook” after the Dutch community in upstate New York where he was born and raised.

That sobriquet eventually grew to include Van Buren’s political supporters. Asked which candidate a certain man was voting for (because only men could vote then), the answer might come back, “Don’t worry; he’s for Old Kinderhook.” The phrase was eventually shortened to the word you and I know today; “He’s OK.”

Over time, OK expanded beyond politics to mean any person, place, thing, or situation that was acceptable. As in, “How’s the food at the new restaurant?” “It’s OK.” Not great, not awful. The “friend zone” of achievement. “OK.”

As is so often the case with words in our convoluted and ever-evolving English language—which tended to be made up as it went along—there are alternative versions of OK’s origins.

One claims it came from the Choctaw Native American language. Another—and it’s a stretch—is that the word somehow morphed out of “oll korrect,” which was an Old English for “all correct.”

The most ridiculous of all explanations has it sprouting from the early 1800s craze among young people of using abbreviations for laughs. A particular favorite was KG, short for “know go,” which in turn was a wordplay on “no go.” How KG supposedly grew into OK stretches credulity, though some people adamantly insist it somehow happened.

Personally, the Old Kinderhook explanation has a serious ring of truth to it and is the one I believe.

This leads to another question. Just how did the word go from an American idiom to global slang? The answer is simple: World War II.

GIs, sailors, and Marines took it with them everywhere they were sent. Since it was a world war, after all, they went to the four corners of the globe. And OK went with them. From Australia and South Pacific islands to the sands of North African and dozens upon dozens of locales in between, America’s men and women in uniform introduced locals to the word. Almost overnight, it joined their local slang lexicon, too.

Why was OK so popular? For starters, it rolls off the tongue effortlessly. Compare that to the trouble German occupiers had introducing their mother tongue, which is filled with such linguistic jewels as Streichholzschächtelchen (“matchboxes”). Little wonder the simple American colloquialism caught on.

And that’s A-OK with me. Matty Van would probably agree.