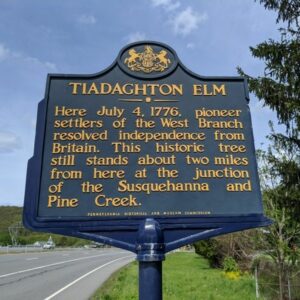 On a hot, muggy Thursday in early July 1776, a handful of men got together in Pennsylvania and declared their independence from Great Britain. But they weren’t meeting in Independence Hall and Messrs. Franklin, Adams, and Jefferson weren’t there. At least, not at this meeting.

Yet on the very same day some 100 miles away, another group met and did the very same thing. Maybe it was an incredible coincidence; perhaps the historical facts were fudged a little to make a good story even better; or perhaps it was just one of those odd things that happen from time to time. Whatever the reason, it’s an interesting tale that’s largely forgotten today.

This is the story of America’s other Independence Day.

It all started a decade earlier. Britain bought a bunch of land from the Iroquois Indians, opening big chunks of Pennsylvania and New York to settlement. There was considerable haziness about the purchase area’s exact boundary. Squatters moved into disputed territory in the West Branch Susquehanna River valley.

Because they were living in the area illegally, those settlers had no voice in Pennsylvania’s colonial government. So, they created one for themselves.

They established what they called a “Fair Play System” in 1773. Three commissioners were elected and charged with making sure everyone was treated fairly. (Thus, the name.) They spent most of their time addressing property headaches arising from faulty deeds and land claims. But they also handled criminal cases that arose, and when they did so the commissioners didn’t mess around. They had the authority to expel anyone found guilty by setting them adrift in a canoe. Say what you may about the system, at least it wasn’t soft on crime.

The arrangement seemed to more or less work to everyone’s satisfaction. Until the colonies decided to go to war with the mother country in 1775.

Because they weren’t included in Pennsylvania’s legislature, the settlers had no voice in the momentous events being debated just then. The folks living in the West Branch Susquehanna River valley were Patriots, too, and resented being left out.

They once again took matters into their own hands. And they did it in a big way.

The Fair Play Men got together in early July on the west bank of Pine Creek. Since it was blazing hot, they met under the shade of the “Tiadaghton Elm” tree. After talking it over, the Fair Play System declared its independence from England.

Little did the Fair Play Men know that at that precise moment some 100 miles away in Philadelphia, the Second Continental Congress was voting to do the exact same thing.

At this point, details get very murky very fast. Two men were dispatched to inform colonial officials what the group had done. The pair were ambushed and robbed on the way by Pro-British Indians, jailed by pro-British Loyalists, later escaped, and finally arrived in Philly only to find the Continental Congress had stolen their thunder a week earlier.

The Fair Play Men didn’t put their declaration in writing the way John Hancock did his. That has historians divided over just what happened. Some say records were destroyed in a later fire. Or maybe nothing was put in writing at all to avoid being discovered by the British (who took a harshly dim view of rebelling against the Crown’s authority).

Others claim the two riders may have carried a copy of their declaration with them, but it was stolen when they were waylaid.

Still others doubt whether the meeting occurred on July 4, suspecting later generations may have stretched the date a little to create a cool coincidence.

For two centuries the “Tiadaghton Elm” was a local landmark until advanced age finally claimed it in the 1970s. A marker stands at the site today as a reminder.

While we will never know the full story, it’s fairly certain something significant happened there in July 1776. Whether it was on the Fourth or another day doesn’t matter. Because it showed American independence was more than just a fantasy held by a handful of political idealists hunkered down in sweltering Philadelphia. It was a dream, a vision of a different kind of country where a man could live the life he chose in freedom. And people in even the most remote backwater parts of this land were willing to stand up and declare it for themselves.