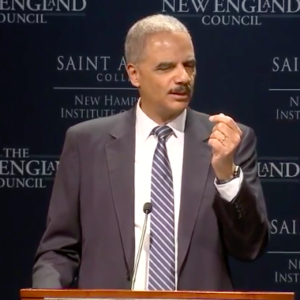 Even before he took the stage at St. Anselm College for the “Politics and Eggs” breakfast event, former Attorney General Eric Holder was sparking controversy on the issue of President Trump and racism.  In a pre-speech interview for Fox News, Holder said that while he wouldn’t call the current president a racist, Trump is using “race as a wedge issue.”

“The president and other members of his administration have tried to use race as a wedge issue to divide the American people, and it is something that I think is reprehensible,” Holder said. “It is inconsistent with who we say we are as a people and it is not what we expect from somebody who is supposed to be the leader of the entire nation.”

During his speech, Holder was asked about the lack of trust between police and communities of color, and he addressed the race issue again–recounting the discomfort he felt when he was pulled over by a police officer in DC’s Georgetown community.

“I was a federal prosecutor. But to this guy, police officer, who was black, I was a potential something,” Holder said. “We need to look at the issue of unconscious bias.”  Holder also claimed that “we [the Obama administration] did a lot to increase trust between the police and these communities,” a claim many would dispute.  According to a Gallup poll, trust in the police fell to a 22-year low in 2015–six years into the Obama presidency–and fell to just 30 percent among black Americans.  In June of last year, trust in the police had returned to its 25-year average.

Holder’s speech focused largely on his work as chairman of the National Democratic Redistricting Committee, an effort to overturn what he describes as Republican gerrymandering. Holder insists that, as he told the Daily Show’s Trevor Noah, he is not pushing “Democratic redistricting,” but instead wants a level playing field.

“I wouldn’t have signed up for this if it was an attempt to gerrymander for Democrats,” Holder told the talk host, and he reiterated that message at St. Anselm. “This is a partisan attempt at good government,” Holder said.

But it was in the area of race relations that Holder created the most heat, suggesting that President Trump was in part responsible for Roseanne Barr’s racist tweet about his former Obama administration colleague, Valerie Jarrett:

“This president has given license to people to say and do things that might not have occurred in the immediate past in our country. And, I think that we are going to be dealing with that long after the Trump presidency, trying to get a handle on those kinds of issues, the kind of things that Roseanne said.”

The Politics and Eggs breakfast is a must-stop event on the New Hampshire #FITN speaking circuit. Former Democratic candidate Martin O’Malley made an appearance earlier this year, as have potential candidates Sen. Jeff Flake (R-AZ) and conservative commentator Bill Kristol. Holder did little to discourage discussion of a possible 2020 presidential bid in his speech and has repeatedly hinted at a possible run.