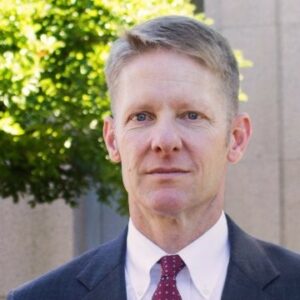 Daniel E. Will
[IS] Opinions

HOELL: Can the State Suspend Your Civil Rights, as Long as It’s in ‘Good Faith?’

N.H. Solicitor General Daniel Will was the leading architect of a dangerous theory adopted last year by some New Hampshire courts; namely, that constitutional rights can be “suspended” during a State of Emergency. Now, the Executive Council is considering whether to appoint him to a position on the N.H. Superior Court bench, and held a public hearing on the matter on May 6.

On April 9 of this year, a bipartisan majority of the New Hampshire House called Will’s theory from last year “disturbing” and approved a bill to rule out his theory under New Hampshire state law.

Last week, Will had a chance to explain or repudiate this view. Instead, Will brushed off the controversy and acted like he had no idea what the House was even talking about. “I’ve never argued that the Constitution can be suspended,” he told Councilor Joe Kenney. Later, he again told Kenney “It’s never been about suspending the Constitution. I have never made that argument.”

When Councilor Dave Wheeler questioned Will on the same topic, he doubled down. “What was argued was not to suspend the Constitution. We never made that argument.” He continued to repeat this lie again and again throughout the recorded hearing.

So where did the idea of suspending the Constitution come from? Have groups like RebuildNH just made up the claim? The simple answer is “no.” The public record here clearly contradicts Will’s denials.

Just take a look at the records for yourself. On page six of the Binford decision, the judge in the case says “the State asserts that Governor Sununu… may use his emergency powers to temporarily suspend or limit fundamental rights.” Again, on page 10 of the same document, the judge says “the State contends… during a state of emergency, executives are granted broad latitude to suspend civil liberties in order to address the emergency.”

“The State” in this court document means Daniel Will, who was the lead attorney for the Attorney General who made the argument for “the State” in the case. Was Will telling Executive Councilors that the judge in the case was lying?

It gets worse than this. Judge John Kissinger explains exactly where he sourced the language about “suspending civil liberties.” Look at page 11 of the Binford decision in the section that has the subject heading: “Governor’s Authority to Suspend Civil Liberties.” Did you catch that subject heading? In that section, the judge says he is going to apply an old case called Smith v. Avino. Lawyers say that Avino is what is called a “non-binding” case, meaning it did not have to be applied in New Hampshire.

What did the Avino case say? The judge quotes it on page 11. It says, “In an emergency situation, fundamental rights such as the right of travel and free speech may be temporarily limited or suspended.“

The judge did not pull this Avino case out of a hat. He applied it because it was the case that Daniel Will asked him to use. Just look at pages 13 and 14 of Will’s own signed objection. There, Will used Avino to argue that during an emergency, constitutional rights have no effect as long as “the executive’s actions were taken in good faith and … there is some factual basis for the decision.”

Talk of suspending constitutional rights is all over the place here. This wasn’t just the judge’s opinion: it’s what the judge said that Will asked him to do. The judge’s words also come right from the main case that Will used in his argument.

From listening to Will’s testimony before the Executive Council, you would never guess this. Will tried to give the impression that he has no idea why anyone would think he has promoted suspending constitutional rights. He denied the truth over and over again. It could be that he was trying to gaslight the Executive Council into thinking that voters concerned about this theory are imagining things. Will seems to think that Council members will not go and read the public record for themselves.

Here’s the bottom line: The danger here is much bigger than a word like “suspend.” If constitutional rights don’t apply as long as government actions are taken “in good faith” with “some factual basis,” that’s the same thing as having no constitutional rights at all. That’s what Will argued, whether he likes the word “suspend” or not.

Sure, Will also said in the hearing that “the Constitution is never suspended.” But what does that mean? Since Will thinks it isn’t “suspending the Constitution” if you stop enforcing it during an emergency, we have no idea if the words “never suspended” mean anything at all, either.

Will’s nomination has now gone beyond a concern about a dangerous argument Will chose to make last year. He has added insult to injury by misleading the Council and voters. He turned down multiple opportunities from councilors Wheeler and Kenney to admit that there might have been something dangerous about his argument. By acting totally oblivious about why “suspending the Constitution” might concern some people, he’s also shown that he just isn’t serious about upholding constitutional rights. None of this looks good for his temperament or ability to do his job as a judge.

Will had one other high profile case where he argued that the state was just in withholding critical information from the public. The “Laurie list” is a list of police officers that have questionable credibility issues. The credibility issues are so significant that the prosecution must provide the names of the officers to the defense council during criminal proceedings or risk violating the rules of ethics. The issue stems back to a mid 1990s court case where a man named Carl Laurie was charged with murder, and the conviction was overturned because the officer involved had significant integrity issues. Will argued that this list should remain private and just recently in a 24-0 vote, the entire New Hampshire State Senate disagreed with Will and voted to make the list public.

Will is an exceptionally bright and capable lawyer. During the public hearing, he was referred to as a “Lawyer’s lawyer.” He is the type of person that attorneys go to for advice. The concern here is that his significant corporate law expertise is something that is desperately needed on the New Hampshire Supreme Court, and this nomination is just a stepping stone to that higher-level position. We should tread carefully when we promote attorneys to the court who are willing to trample constitutional protections in their zeal to win cases. Arguing to retain the “Laurie’s list” is yet another example of not putting the public’s best interest ahead of the state.

Given that our N.H. Supreme Court is the final place to argue for the protections of our civil and constitutional rights, and knowing that the federal government is discussing “packing the courts” with justices who would be willing to trample those rights, we need to protect our state’s court system. It is imperative that we only approve justices that will be fair and impartial and who are willing to ensure that our constitutional and civil protections are never trampled. Nominees who defend and argue for unjustifiable actions of the state are not suitable to sit in these positions.

Our Constitutional rights are in a lot of danger in New Hampshire. It is time for pro-liberty groups and leaders who have concerns about Will’s nomination to get off the fence and oppose him. Call or email your Executive Councilor and tell them to check the facts and to vote against Will’s confirmation.

JR Hoell, a former state representative from Dunbarton, is corporate secretary of NHFC and Secretary/Treasurer of RebuildNH.