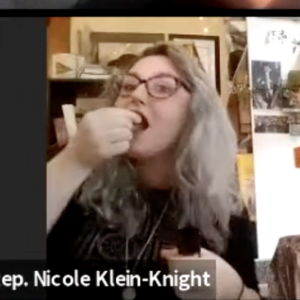 High On Her Own Supply? NH Dem Doses Herself With Cannabis During House Hearing

A New Hampshire state representative appeared to pop a pill from her supply of medical cannabis during a House committee hearing on marijuana laws Monday, resulting in raised eyebrows and the chairman shutting down her feed during the Zoom meeting.

Rep. Nicole Klein-Knight (D-Manchester) is known as one of the more militantly progressive members of the 400-seat body. During last week’s socially-distanced session in the 50,000 square-foot Bedford Sportsplex, she wore a “plague mask” in protest — an image picked up on social media as a symbol of partisan overreaction to the COVID threat. 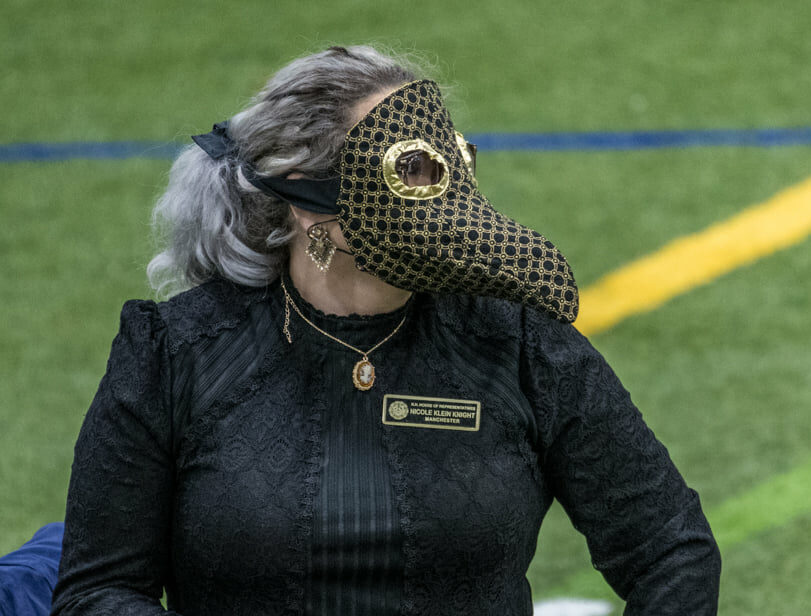 During Monday’s hearing of the House Criminal Justice and Public Safety Committee on two bills reducing penalties for marijuana possession, Klein-Knight spoke out regarding concerns about cannabis products like edibles could be laced with other, more dangerous, substances.

“I think we have a major lack of misunderstanding [sic] when it comes to regulating cannabis to make it safer, so it’s not laced with things,” Klein-Knight said. Then, holding up a pharmaceutical bottle, she added, “And would you believe that I am a medical card carrier and this is what [cannabis] gummies look like? It’s in a medicine bottle. Would you believe that that is how they package it? There are labels. There are warnings. There’s not a bowl of gummies left out, and it’s regulated completely.”

As the committee took up the conversation, Klein-Knight proceeded to ostentatiously open the bottle on camera, dig out a cannabis gummy and pop it into her mouth. The chairman of the committee, Rep. Daryl Abbas (R-Salem), responded by throwing up his hands, then asking to speak to the ranking Democrat and instructing Klein-Knight to turn off her video feed.

Though the hearing continued, the Manchester Democrat did not appear on the video feed for three hours. When she did, to vote 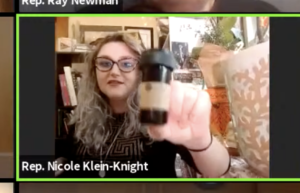 on retaining HB 526 in committee — a bill related to fines for marijuana possession — Klein-Knight appeared befuddled by the request.

“No,” she called out when the clerk asked for her vote. Then after a few seconds’ delay, she said, “I mean yes, sorry.” Then another few seconds passed and Klein-Knight called out yet again, “I mean no. Just go with no, please. Thank you.”

The bill was retained in committee by a vote of 12-7.

Klein-Knight did not respond to a request for comment.