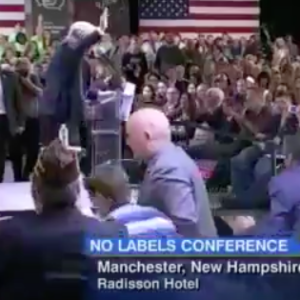 Hey, Who’s That in the Front Row of Trump’s N.H. “No Labels” Speech?

During Tuesday’s televised Democratic gubernatorial debate, many viewers were no doubt taken aback to learn that far-Left progressive Steve Marchand was part of the bipartisan, moderate “No Labels” organization here in New Hampshire. And as moderator Adam Sexton pointed out, at an event in 2016, the organization gave then-candidate Donald Trump what Sexton called their “problem solver award.”

Why would a progressive activist like Steve Marchand be part of an award for Donald Trump? Marchand said on WMUR Tuesday night that he found out “at the last minute” that Trump was among the recipients and promptly resigned fro the No Labels organization.

“I did not get paid at the end because Donald Trump does not represent anything remotely non-partisan,” Marchand said.

And via emailed, his campaign confirmed this with NHJournal.com:

“In October of 2015. there was a No Labels event in which everyone from Bernie to Kasich to Trump attended. There were no endorsements or seal of approvals given at that event.
In January, NL offered a “Seal of Approval” to any presidential candidate who would agree to a series of policy goals.
Steve did not attend the January event and was not a participant in it. He had expressed his grave concerns about Donald Trump receiving any positive recognition. Once Steve learned that Trump was going to recieve this seal of approval, he refused to attend and disassociated himself from the organization.
Steve Marchand obviously believes the Donald Trump has never been a problem-solver, he is a problem-creator. “

And, in fact, WMUR had the story wrong. The “problem solver” designation wasn’t an award at all. Every candidate who signed off on the “No Labels Problem Solver Promise’ guidelines got the designation. In January 2016, that included Republicans Dr. Ben Carson, Gov. Chris Christie, Gov. John Kasich, Sen. Rand Paul and Donald Trump; and Democrat Gov. Martin O’Malley.

Former GOP Utah Governor (and current U.S. Ambassador to Russia) Jon Huntman went out of his way to make it clear that the “Problem Solver” designation was not an endorsement.

“We are not endorsing anyone,” he said. “This is not a seal of approval. The candidates are simply accepting what we have defined as a process for problem-solving and leadership. After all the name-calling and nastiness, someone is going to have to get something done for the country,” Huntsman told the Union-Leader.

And while the No Labels group did gather in Manchester in January 2016 to announce the candidates who signed off on their “promise,” none of the candidates–including Donald Trump–showed up.

So Steve Marchand’s claim that he refused to attend the January event is misleading. It was just a press conference with former U.S. Senator Joe Lieberman and the bipartisan No Labels organization.  He couldn’t snub Trump because Trump wasn’t there.

No, the only opportunity Steve Marchand had to turn his back on Donald Trump came a few months earlier at the “No Labels” convention in Manchester, when Donald Trump gave a speech to a packed house at the Radisson.  That’s when Steve Marchand could have shown his outrage by staying home.

Hey….who’s that getting up in the front row at the end of Donald Trump’s speech?

Why, is that Steve Marchand?  It certainly looks like him. If so, he apparently sat through the entire Donald Trump speech. (Click here to watch the Trump speech in its entirety.)

Marchand didn’t march out in disgust. He didn’t speak out in opposition. He didn’t skip the event in protest. No, he sat through Trump’s entire speech. 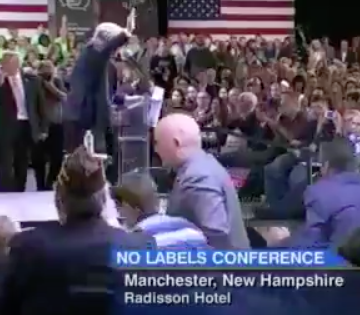 In 2015, Steve Marchand was working for centrist “No Labels” when Donald Trump addressed their convention.

Marchand was on the front row.

Marchand contacted NHJournal to deny that he is the person in the video. “That is absolutely not me,” Marchand said, while acknowledging that he was at the Radisson during Trump’s speech. “I was never in the room with Trump. That’s just some bald guy.”

Marchand claims that he was working elsewhere in the Radisson handling his “No Labels” duties and simply didn’t have time to sit and listen to any of the speakers. “It was a cattle call event for everyone from Bernie Sanders to Donald Trump. I was too busy to sit and watch the speeches.”

So while he was at the building, attending the event and working for the hosting organization,  the person in the video above, Marchand says, is not him.

Regardless, it turns out Marchand has managed to find kind words for other Republicans on the far Right. In 2007, Marchand gave a shoutout to hardcore pro-life, anti-gay-marriage Republican governor and former Arkansas Baptist preacher Mike Huckabee:

“And the thing that I like about Governor Huckabee is that I see him using faith as a way to bring people together. Not in a messianic way to say this is the chosen way to go but to say that we have a responsibility, a global responsibility of public service.”

And then there’s Marchand’s work on the Concord Coalition, which for years has advocated cutting current Social Security benefits, along with other fiscally-conservative measures.

How did Steve Marchand go from a “Concord Coalition/No Labels” moderate attending Donald Trump events and praising Mike Huckabee to a liberal firebrand who support unlimited, taxpayer-funded abortion for minor children without their parents’ knowledge or consent; and local, income-based taxes in New Hampshire?

That’s a question primary voters may want to answer before Tuesday.